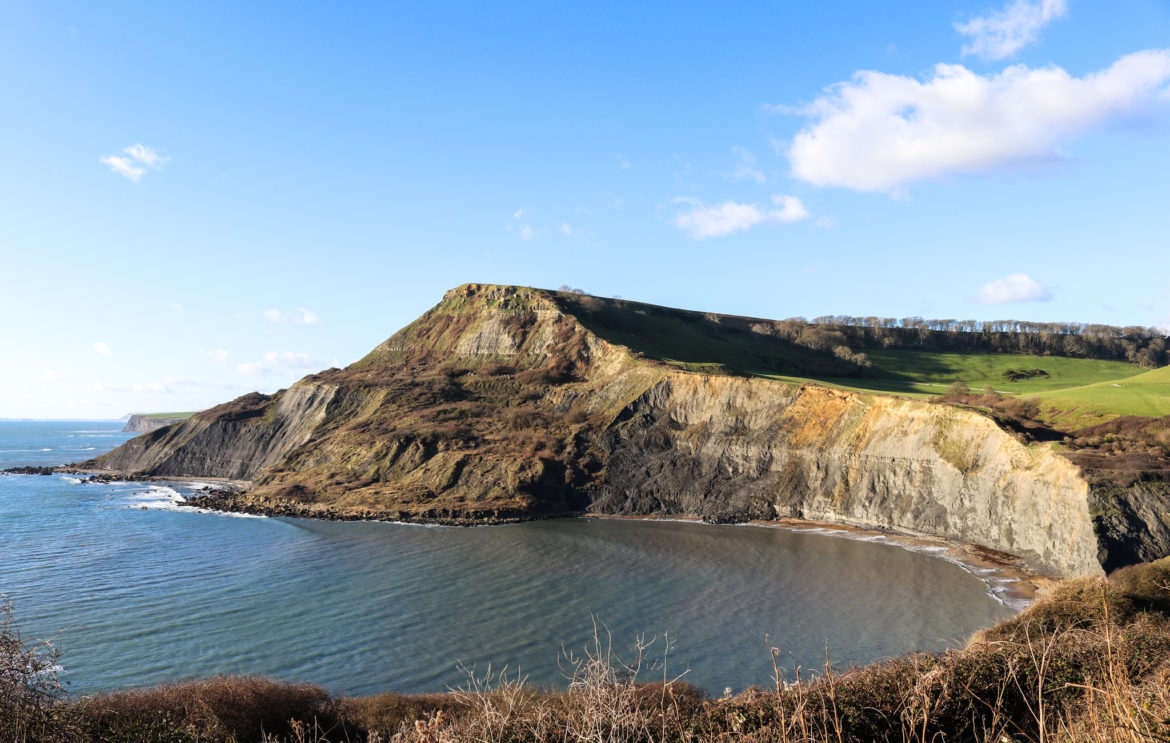 If your idea of a dream day at the beach involves a wild and secluded bay where you can wile away the hours watching the odd passing boat and reading a good book, Chapman’s Pool is hard to beat.

Worth Matravers is the cove’s closest village, where you can warm up at the Square and Compass pub with a pasty and pint by the log fire after a blustery day, or cool off with a cider in the beer garden in the summer after the rewarding walk down to Chapman’s Pool and back.

Chapman’s Pool is a bit of a walk to get to and can be fairly challenging in places, so children and some dogs might struggle.

A good pair of walking boots is also advisable as the steep path down to Chapman’s Pool can be slippery when wet. (There is an alternative, longer route, which is more gentle, that takes you through the valley.)

Chapman’s Pool is a good place to see examples of the Jurassic Coast’s Kimmeridge Clay rock formation – named after nearby Kimmeridge Bay, where the clay with its abundant fossils is most famously displayed.

Spend some time rock-pooling and fossil-spotting on the shale ledges at Chapman’s Pool, and soak up the wild, untouched nature in this little-known, rugged spot that is one of Purbeck’s hidden gems.

Some of the fossils found at Chapman’s Pool include ammonites, nodules, shells and reptiles from the Upper Jurassic. Check for fossils amongst the shingly shoreline, but even if some are spotted in the cliff face, it’s best to view and even photograph them as a memory as hammering here is prohibited as well as dangerous. 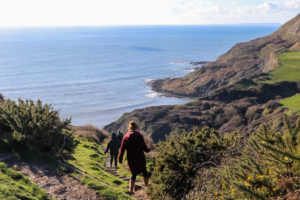 The path down to Chapman’s Pool from Renscombe car park is steep in places and can be very muddy and wet after rain. Chapman’s Pool is best visited on a dry day after a spell of dry weather.

As with all coastal areas, keep away from cliff edges as loose rocks and shale can fall and landslips occasionally occur.

Rocky ledges may be slippery underfoot.

Mobile phone signal may be poor in remote areas such as Chapman’s Pool.

The nearest facilities are in Worth Matravers village.

Can I swim at Chapman’s Pool?

Chapman’s Pool has become known as a bit of a secret wild swimming and snorkelling spot, however it isn’t recommended for novice swimmers or children. There are no facilities and the beach is not lifeguarded.

One of the attractions of this small cove is that it provides a contrast to the busier beaches and bays of Purbeck with their sandy beaches, seaside facilities and safe swimming areas, so is best explored on dry land.

For a quiet cove swim away from the crows, try Worbarrow Bay (recommended for experienced swimmers only) or walk further along Knoll Beach in Studland Bay away from the summer crowds, which benefits from safe, shallow waters.

Experienced sailors do sometimes anchor here for a pit-stop, explore or swim in settled weather, however it’s recommended to check wind direction (it can be open to song south-westerlies) and potential swell before visiting by boat and mooring.

With each turn of the path down to Chapman’s Pool there is something new to discover or a different angle of the dramatic scenery to view. And there are echos of the past in the cliffs themselves and old, man-made legacies, such as the old coastguard hut and lifeboat station. 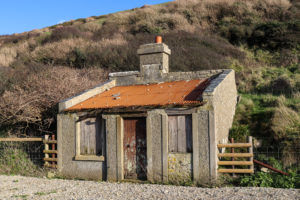 Following various sea tragedies off the ledges here, a lifeboat station was built at Chapman’s Pool in the 1860s.

It was, however, short-lived due its remote position making it difficult to recruit volunteers. This, added to the cost of its upkeep, along with regular landslides, mean that the station was closed.

Today, the abandoned coastguard hut and lifeboat building on the slipway can still be seen and evoke a sense of the past.

The lifeboat building has however received a new lease of life as it is now used by fishermen as a storage facility. 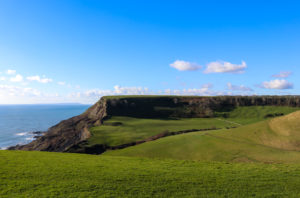 The imposing cliff rising on the western side of the bay is Houns Tout. There is a good walking route from Kingston to Houns Tout, which gives impressive views of Chapman’s Pool from the west.

The walk picks up the South West Coast Path and follows a hilly 3.5-mile circular route from Houns Tout car park. As well as views of Chapman’s Pool, you’ll see the Encombe Estate, Swyre Head, Corfe Castle and across to St Aldhelm’s Head past the eastern side of Chapman’s Pool.

The walk to Chapman’s Pool takes you away from the modern world and into the relatively untouched landscape of this part of the Jurassic Coast. 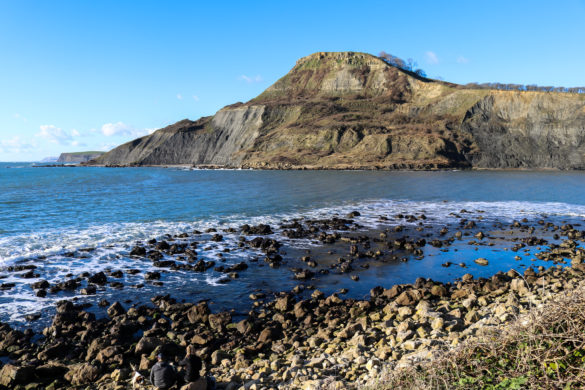 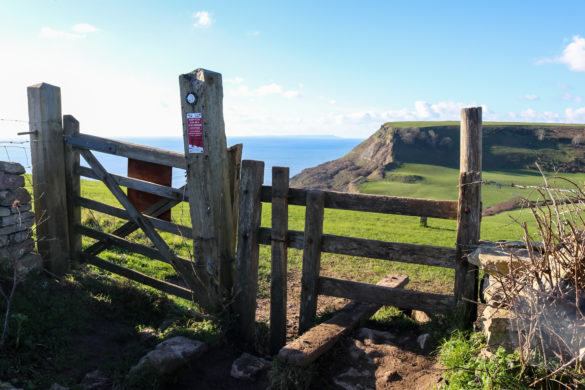 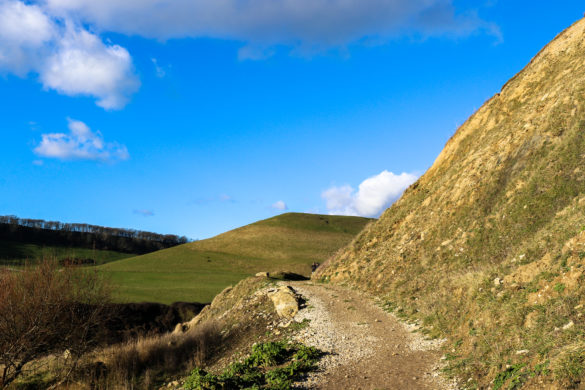 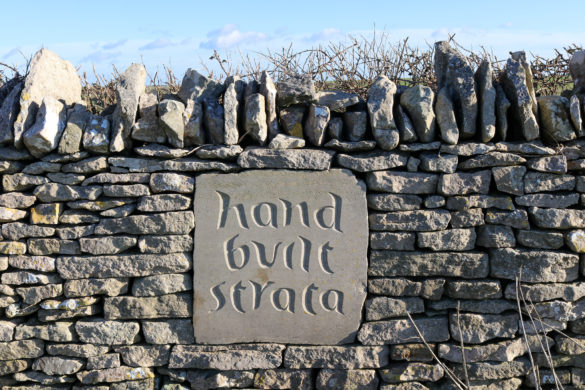 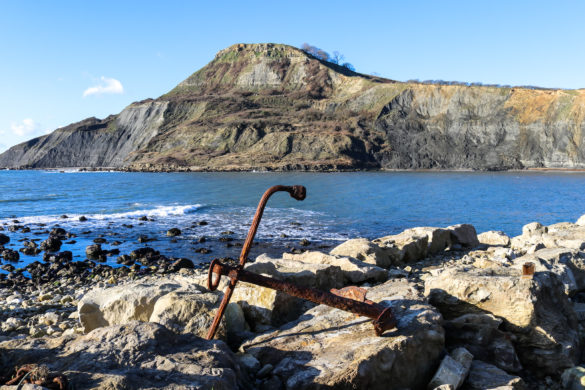 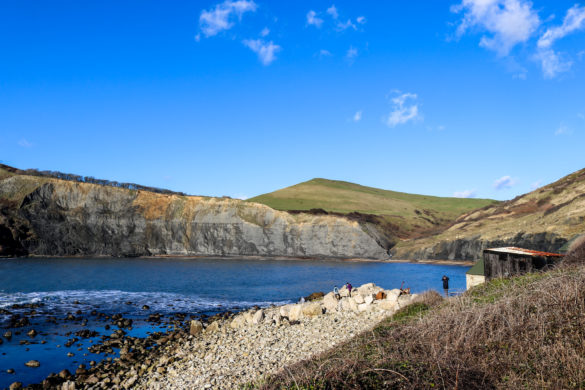 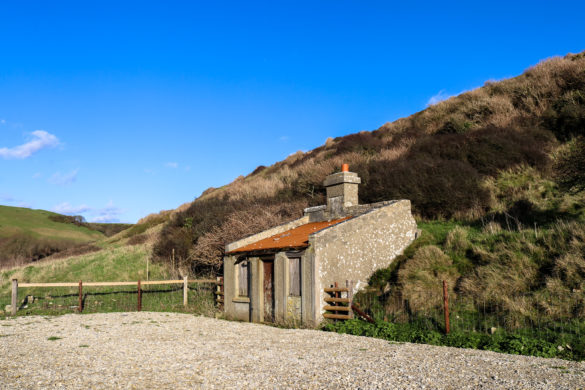 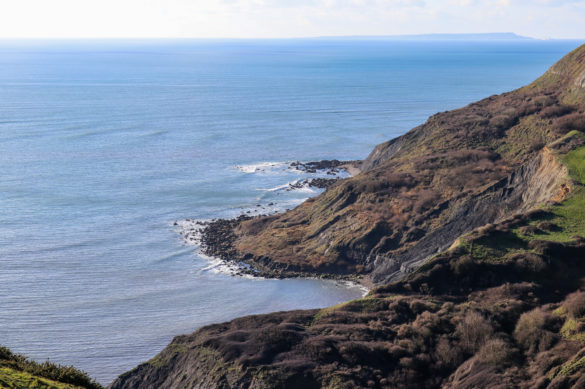 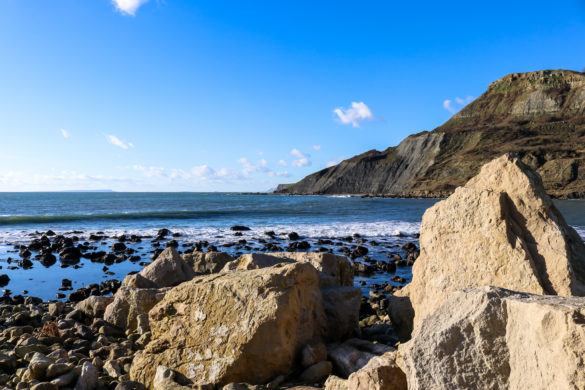 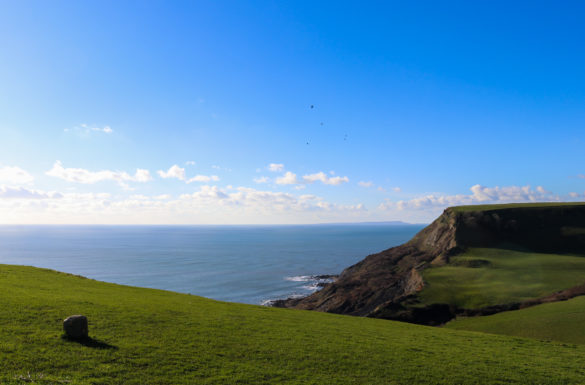 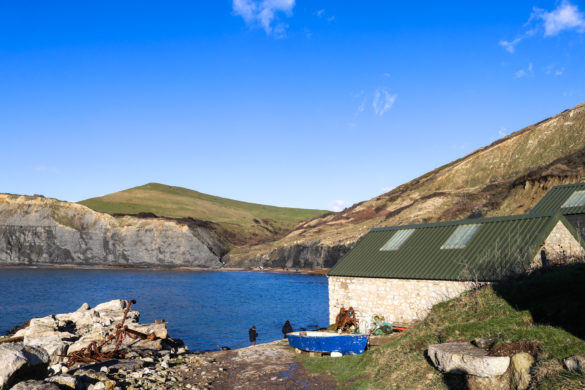 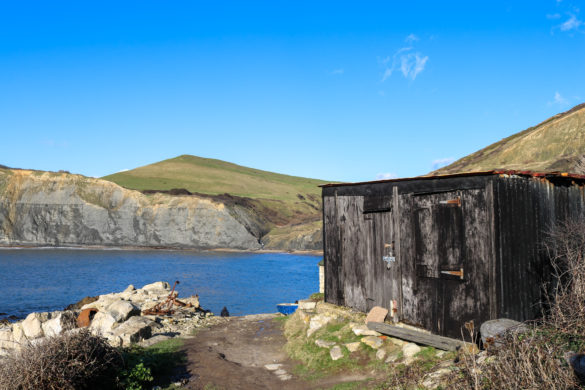 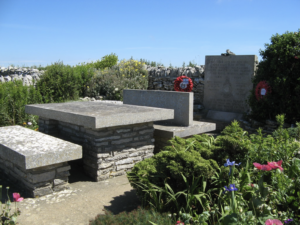 Along one route down to the cove, along the South West Coast Path on Emmet’s Hill, is the Royal Marines Commando Memorial. You can make a quick ten-minute detour to see this on your way down to Chapman’s Pool.

This unusually-located memorial commemorates Royal Marines who lost their lives during and since WW2.

An inscription reads: “Rest awhile and reflect that we who are living can enjoy the beauty of the sea and countryside.”

The original memorial remembers those who were killed between 1945 – 1990, but a further stone has been added to recognise more recent sacrifices. 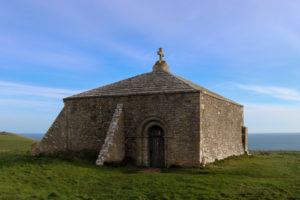 From Chapman’s Pool and Renscombe car park you can walk to the curious Norman St Aldhelm’s (also St Alban’s) Chapel on the headland of the same name. It’s a good half an hour walk from the car park, but worth it for its intriguing position and history.

Possibly originally built as a lookout tower for Corfe Castle, an interesting fact about this building is that its four corners point to the cardinal points of the compass.

There are various legends surrounding this unique little chapel, including its use as a ‘wishing chapel’, where local girls would drop a pin down the central column and make a wish for their true loves. Another is that of a grieving father who built it in memory of his daughter and her groom who drowned after their boat capsized below the headland. It’s said a light was kept burning in the chapel to warn other sailors of dangerous waters. 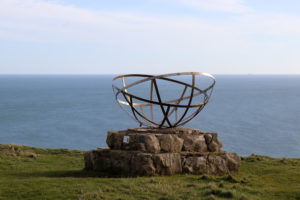 Also located at St Aldhelm’s Head is the Purbeck Radar Memorial, which commemorates the role played at Worth Matravers in the birth of modern telecommunications during World War II.

Designed by a local sculptor and installed by local volunteers, the stainless steel structure sits on a Purbeck stone plinth and represents two radar dishes.

The full background to Purbeck’s involvement in the development of early radar can be found on the Purbeck Radar website: www.purbeckradar.org.uk/index.html

However, visitors should be advised that making the roughly 1km walk along the bay to reach Egmont Bight isn’t recommended due to the risk of being cut off by the tide.

If you do venture this far, there is also the risk of falling rocks and shale, so keeping a safe distance from the cliffs at all times is sensible.

How to get there and parking 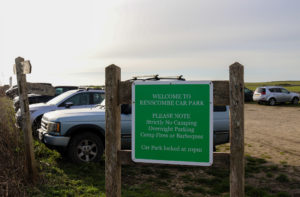 The nearest place to park is Renscombe Car Park in Worth Matravers (BH19 3LL).

The walk down to Chapman’s Pool is about half an hour from the car park.

The below map shows two walking routes from the car park, one of which encompasses the Royal Marines Commando Memorial. 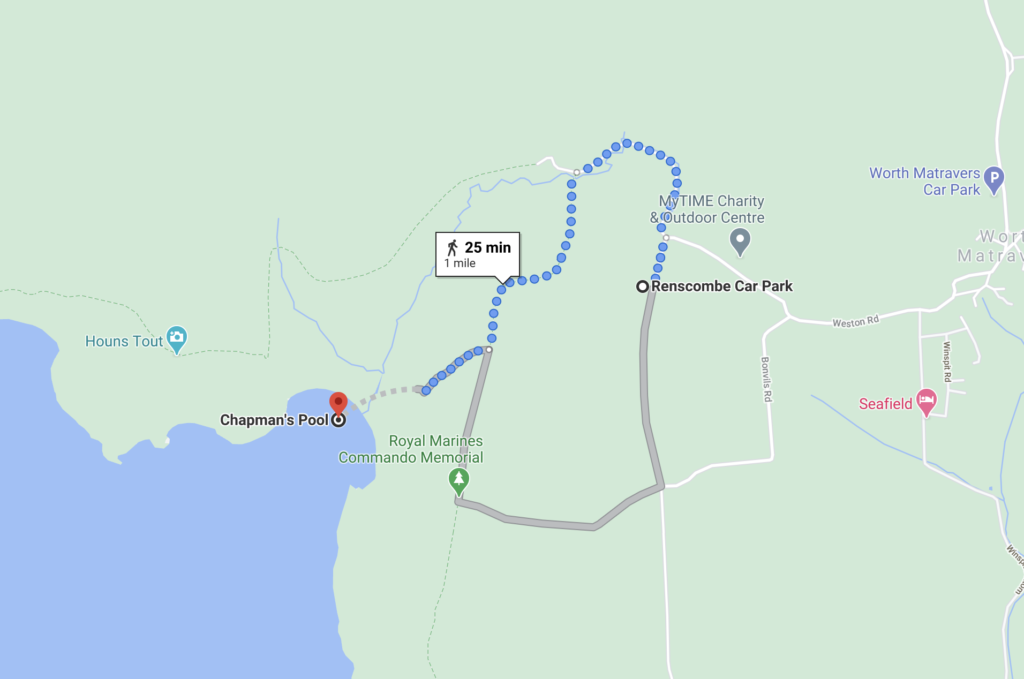 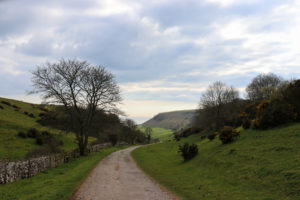 Follow the track that leads from South Street, Kingston

You can also get to Chapman’s Pool from the village of Kingston.

Parking at Houns Tout Car Park, walk back down into the village, turning right down South Street.

Continue on South Street by the church until the road becomes a track through the valley farmland. Note that dogs must be kept on a lead around any livestock here.

The path will eventually lead to Chapman’s Pool and involves less climbing than the usual route.