Swanage is a popular, traditional seaside town on England’s south coast, that attracts many visitors throughout the year but is especially busy during the summer.

Swanage is located on the south coast of England in Dorset. It lies to the west of Poole Harbour and Bournemouth and to the east of Weymouth. From Dorchester, it’s a 25-mile drive in a southeast direction. It’s on the Isle of Purbeck and famous for being part of the Jurassic Coast.

The most flexible way to arrive is by car but in the summer months, the roads are very busy and so it’s best to avoid traveling at peak times. There are two directions to get to Swanage by car, either via Wareham or take the Sandbanks Ferry from Poole to Studland.

Buses run from Poole, Bournemouth and Weymouth and you can also get a bus or taxi from Wareham Railway station – Swanage’s nearest mainline station. There is also the Swanage Railway, but as a heritage line, it only currently runs from Norden to Swanage.

Places To Visit Around Swanage

Rivendell Guest House, a characterful Victorian/Edwardian villa with many original features, is a B&B with five guest rooms, as well as two self-catering studios. It’s in Kings Road West, a central route into Swanage, within a short distance of the railway station and the main shopping area. 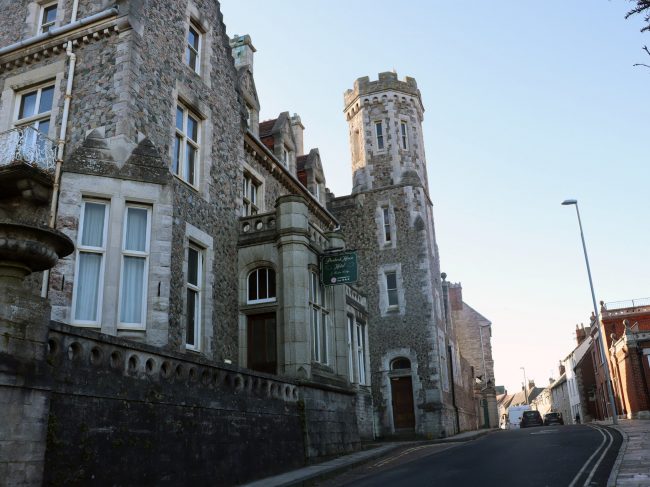 In the centre of town along the High Street you can’t miss The Purbeck House Hotel as it’s an imposing gothic building, originally built in 1875 as a private home by the Victorian gentleman, George Burt. The main house is decorated with artefacts that George Burt brought back from London including a tiled floor originally laid in the Houses of Parliament and statues from the Royal Exchange. As a hotel, it now has 18 characterful bedrooms and very ornate public areas including a grand entrance and lounge. Louisa Lodge In 2003, additional accommodation was built in the large hotel grounds. Louisa Lodge was designed to blend in with the original house and it has 20 modern bedrooms. The hotel is about a five minute walk from the bus station and a five minute walk in the opposite direction to the sea front. 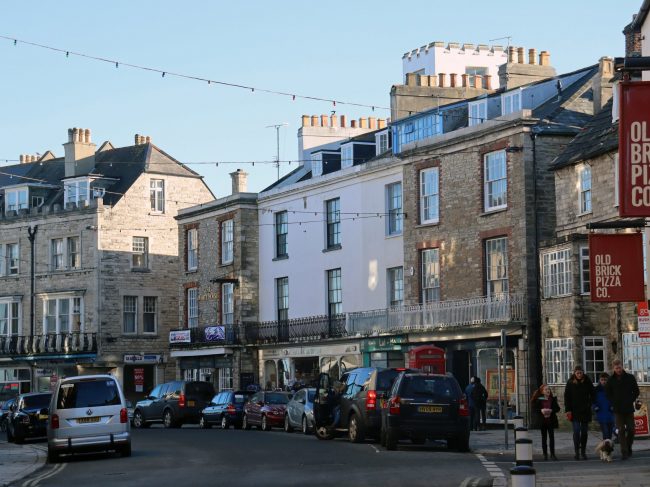 Ocean Lodge is a three-storey Victorian terraced property located close to Swanage town centre. It’s just a few minutes stroll from the sandy beach, Swanage Pier, the Swanage Railway, and lots of shops, pubs, cafes and restaurants. It has four guest rooms, all of which are en-suite, with tea and coffee making facilities, Freeview television, a small fridge and free wifi.

Millbrook Bed & Breakfast is a family run guesthouse that is situated just a few minutes level walk from Swanage town centre and Swanage Railway. It has eight guest bedrooms and is an established business. The current owners, Tracy and Anthony Jones have run Millbrook since 2013 when they bought it from Anthony’s parents, who had owned it for 17 years previously.

Glenlee Guest House is ideally located opposite Beach Gardens tennis courts and putting green, a few minutes away from the seafront. It provides bed and breakfast, as well as evening meals. The attractive 1930s detached guest house is licensed, has its own car park and all rooms are en suite with fresh flowers, high-definition smart televisions and free wifi. 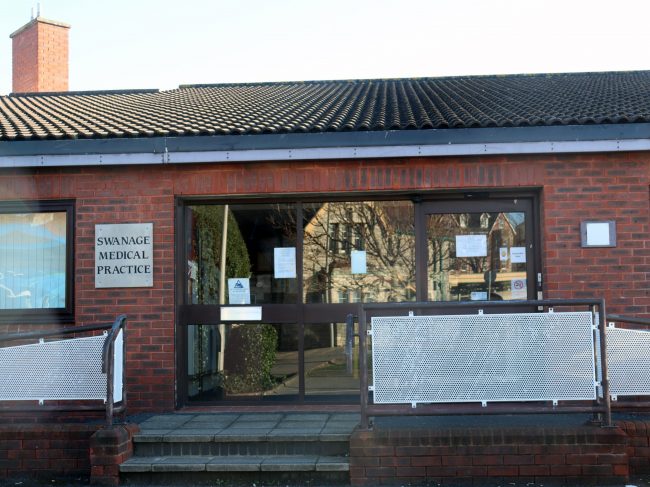 Swanage Medical Practice is a large surgery based opposite the Co-op and serving the entire town. It has 11 doctors of which nine are practice partners and two are salaried GPs. You can request to see a male or female doctor. Surgery times The medical practice is open from 8:30am – 1pm and 2pm – 6:30pm, Monday to Friday excluding UK bank holidays. There are also some early morning and evening weekday and Saturday morning appointments available. These appointments are intended for those who find it difficult to make appointments during normal opening hours. Residents, holidaymakers and visitors can attend the Sit and Wait surgery between 3pm – 3:30pm Monday – Friday excluding UK bank holidays. Out of hours If you are unwell in the evening, overnight or at the weekend or during a UK bank holiday you can contact the NHS 111 by telephoning 111. There is also the Minor Injuries Unit at Swanage Community Hospital, which is open 8am – 8pm every day of the year. In an emergency, ring 999. 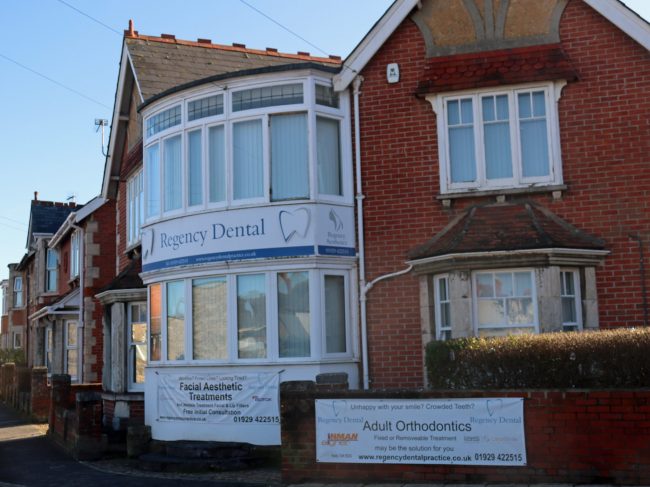 Regency Dental offers private dental care and does not accept NHS patients except children of current private clients. It is run and owned by Dr Huw James and Vicki Coleman, who both work at the practice. The practice’s philosophy is one of minimal intervention, believing that the less drilling and filling they do, the better it is for your teeth. Alongside the standard treatment, they offer advanced cosmetic and restorative dentistry. The dental practice aims to provide continuity of care for you and your family. It does this by endeavouring to ensure that you and your family see the same dentist, every time you come in for an appointment. Opening times Regency Dental is open Monday to Thursday 7:45am to 5:30pm and Friday 7:45am to 5pm. Saturday appointments are available by arrangement. 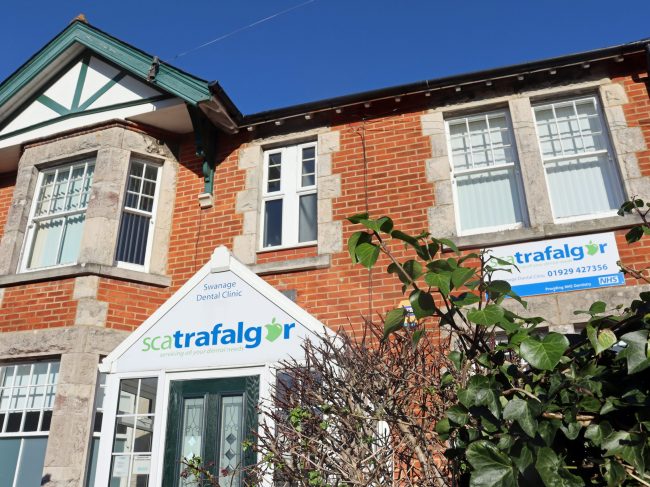 The SCA Trafalgar Dental Practice offers dental treatment on the NHS and privately. It is one of six dental practices run by Social Care in Action (SCA), a not-for-profit group focussing on health and wellbeing. It is currently accepting new NHS and private patients. The practice opened in 2013 after a campaign from residents to bring NHS dental services back to Swanage. SCA Trafalgar was awarded a 20 year contract and has since invested in the premises, providing the option of dental treatment on the NHS. Opening times The Trafalgar Dental Practice is open Monday to Friday 8:30am to 5:30pm. It closes 1pm to 2pm for lunch. It’s not open on Saturday or Sunday.

Tilly Whims is a vibrant and colourful shop stocking women’s and men’s clothing suitable for exploring the Dorset coast. From Joules wellies to winter woolies to summer shorts, there is something to cope with all the different types of weather that you can experience in Swanage.

Coast & Country is the sister store to Tilly Whims and focuses on affordable outdoor clothing for all the family, ideal for the coast and in the country. Brands include Regatta and Crew Clothing.

An outdoor clothing supplier for all the family.
Shops

A homeware shop, stocking goods from large furniture to small trinkets with a seaside theme. Sea creatures and coastal birds are popularly depicted on many items. The whole range is aimed at invoking a warm and welcoming Purbeck home style.