One of the most iconic landforms on the South Coast – Old Harry Rocks – is just a stone’s throw from Swanage and an important feature of Dorset’s Jurassic Coast history.

There are various walking routes to Old Harry Rocks from both Swanage and Studland, each offering breathtaking views of this unique rock formation. 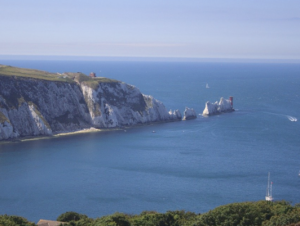 The Needles, off the Isle of Wight

The white chalk promontory and ‘stacks’ that make up Old Harry rise from the sea between Swanage Bay and Studland Bay at Handfast Point on the headland of Ballard Down.

They were once part of a chalk ridge that connected to The Needles on the Isle of Wight. On a clear day you can stand up on the cliff and see across to The Needles – three chalk stacks, similar to Old Harry Rocks, which rise from the sea off the island twenty miles away.

From certain angles, and depending on where you are in Purbeck you can also see the stack known as Old Harry’s Wife, as well as further stack and a stump to the west of Old Harry known as the Pinnacles.

There is also a now-inaccessible chalk ‘island’ known as No Man’s Land, which has become isolated by the sea. The gap between this foreland and the mainland – once connected by a narrow ridge – is called St Lucas’ Leap after a greyhound fell to its death whilst hare-coursing for its master.

Legends in the landscape – who was Old Harry?

So how did Old Harry Rocks get their name? There are various stories that like to make the claim…

If you’ve been to see Agglestone Rock, you’ll be familiar with the local legend associated with the devil – who, it’s said, tried to throw the 400-tonne rock from The Needles on the Isle of Wight towards Corfe Castle. And Old Harry Rocks has its own devilish connection.

The term ‘Old Harry’ is in fact an old name for the devil himself, and one story says that he used the rocks as a place to sit and have a snooze. 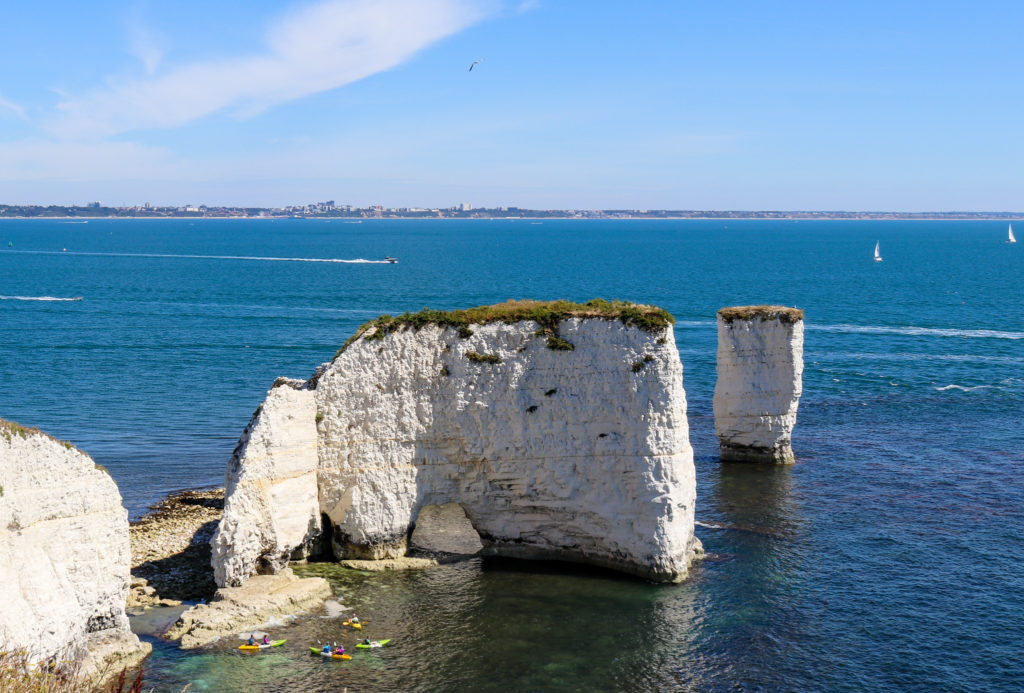 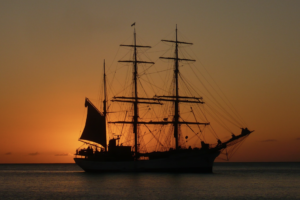 Another fable tells of a shipwrecked Viking who, during a fierce storm, was cast into the sea and turned into a pillar of chalk.

Or perhaps they are named after someone a little more local: a pirate from nearby Poole named Harry Paye.

It’s said he used the rocks to conceal his ship before catching passing merchants to plunder their vessels for gold and other treasures. The rock stacks and stumps were also the perfect place to hide his stolen goods.

Harry Paye is still remembered in Dorset today, with an annual pirate-themed, family-fun and charity fundraiser day held on Poole Quay and named in his honour.

How were Old Harry Rocks formed?

Originally part of the chalk seam that connected the Isle of Wight to Dorset, Old Harry Rocks were created over thousands of years through the coastal erosion of the cliff face.

The chalk – made up of millions of plankton and other sea creatures’ skeletons that became compacted over the course of 35 million years – began eroding after the last Ice Age.

The Solent strait, which now separates the Isle of Wight from England, was formed following rising sea levels, and processes of erosion have since gradually carved into the chalk rock of Old Harry, weakening it through hydraulic action. This initially caused crevices, which became caves, and then arches – the top of these arches eventually collapsed, leaving the chalk stacks known as Old Harry and Old Harry’s wife.

Old Harry has in fact had two ‘wives’ – the current, smaller stack is known as Old Harry’s Wife, but there was a previous stack that has long since eroded and fallen into the sea that was his original wife.

Erosion here is a continual process – who knows how Old Harry will look in a few hundred years’ time.

There are many other areas around the Jurassic Coast of Dorset where similar coastal processes have created stunning features on the landscape, such as Durdle Door and Stair Hole in Lulworth.

As well as the stunning scenery, the grassland and cliffs on this walk are a wonderful opportunity to do a bit of wildlife-spotting, from coastal and wildflowers at your feet, sea birds above you and – if you’re lucky – dolphins below you. 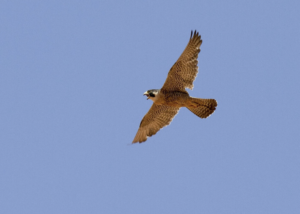 Spectacles in the sky

The greater black-backed gull is a familiar face around the cliffs at Old Harry.

Look out, too, for cormorants and peregrine falcons, which are regularly sighted here.

Surprises in the sea 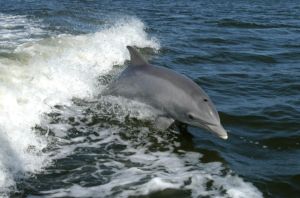 Occasionally seals and pods of bottlenose dolphins can be seen in the sea around Old Harry Rocks.

And increasingly, the curious sunfish has been spotted around Old Harry’s waters.

Another good place to spot these intriguing sea creatures is from the cliff walks at Durlston Country Park.

Tours that include Old Harry Rocks

Experience Old Harry from the sea

You can book onto a kayak tour or boat trip to view this incredible landform from the sea.

The Trust maintains the historic Victorian pier in Swanage, which is a local hub for various water activities, including diving and angling.

Boat trips include shorter trips encompassing Old Harry Rocks and Poole Harbour, or whole days out, allowing you to view more of the Jurassic Coast. 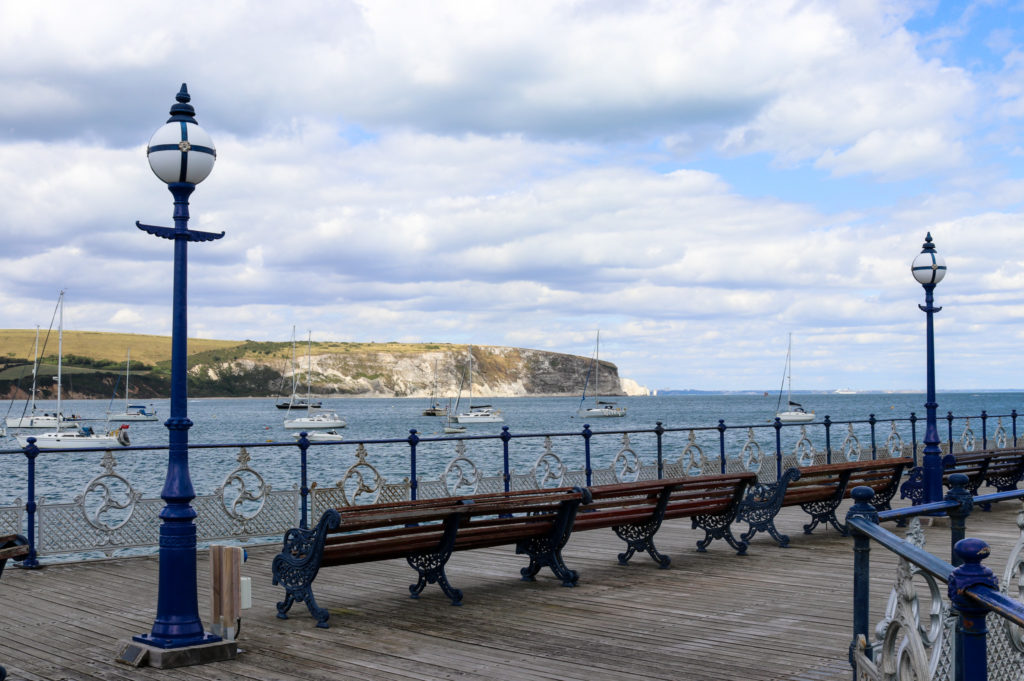 Swanage Pier, looking toward Ballard Down and Old Harry Rocks

Set off from Knoll Beach in Studland (two-hour tour), or Swanage Bay or Poole Harbour (both four hours) for a unique way to explore Old Harry Rocks.

Take a guided tour on a kayak or combine with a coasteering session as part of Jurassic Watersports’ multi-activity day out for a full day of adventure.

Nearby outdoor activity centre Fore/Adventure offers sea kayak and canoe tours to Old Harry Rocks from its base at Middle Beach in Studland.

This ride is for experienced riders over the age of 14 (the stables offers a range of rides for all abilities).

With open field cantering and stunning views of Old Harry and the surrounding land and seascapes, this unique way to explore Old Harry Rocks takes around one hour 45 minutes.

There are various sight-seeing flight options leaving from different points in Dorset.

Witness Dorset from above with views over Bournemouth; across to Old Harry Rocks and the Isle of Wight. Private planes are usually limited to two passengers, who share the cost of the trip.

Old Harry Rocks is the last stop on this aerial tour of Purbeck, which encompasses Corfe Castle, Poole Harbour and Sandbanks: www.heliadventures.co.uk/bournemouth

This drone footage shows a unique perspective of Old Harry Rocks from air, which gives you a taste of what you’ll experience:

Walking routes – how to get to Old Harry Rocks

However you get there, once you’re up on the cliff and looking down onto Old Harry Rocks, and across healthand, over sandy bays and out to sea, these are some of the finest views you will find on the South Coast. 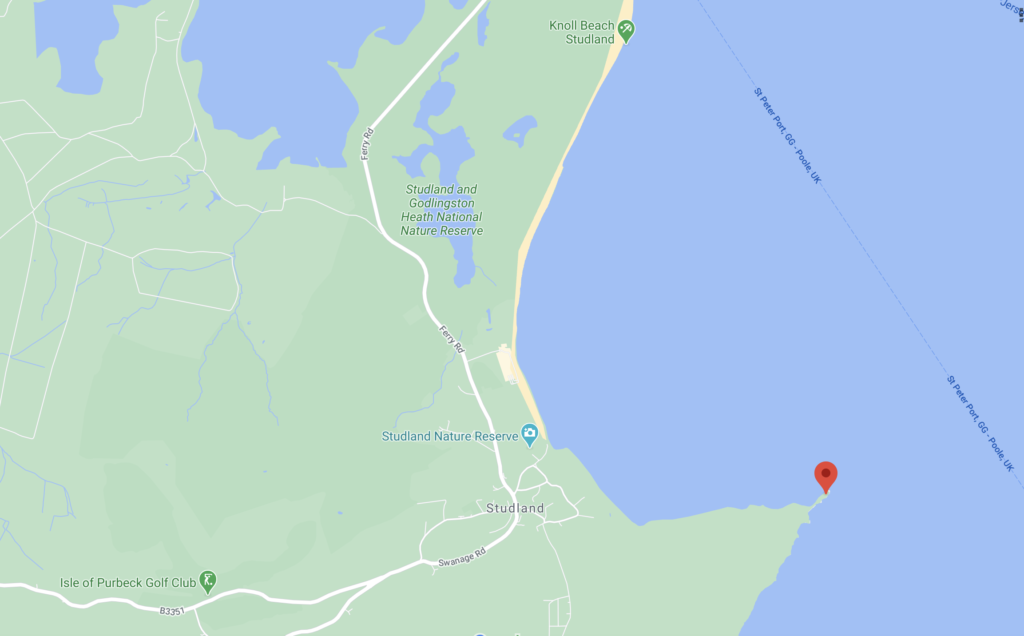 As with all coastal walks, keep away from the cliff edge at all times – children should be supervised and dogs kept on a lead.

Make a day of it by exploring what the area around Old Harry Rocks has to offer: 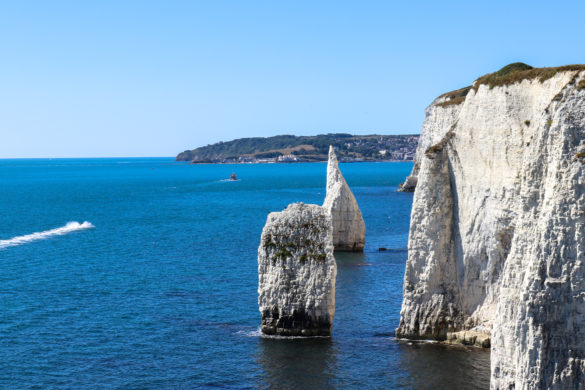 The Pinnacles, from Old Harry Rocks 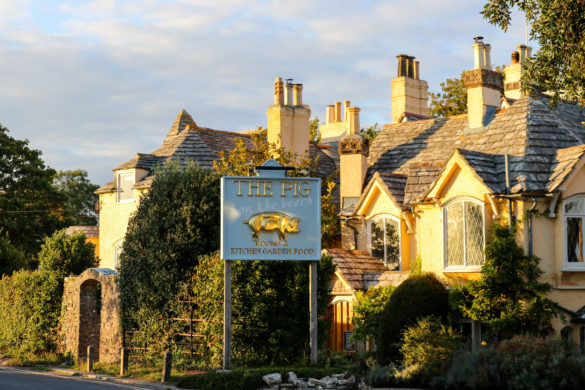 The Pig on the Beach in Studland 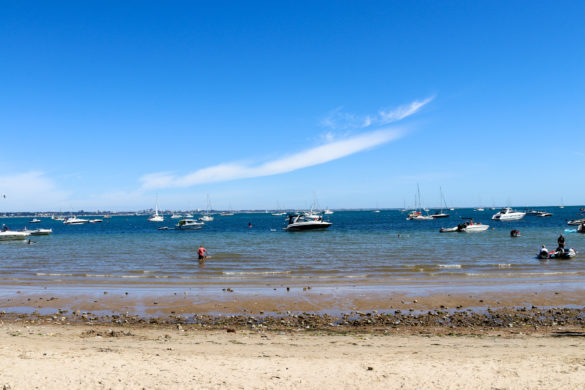 Watch the world go by on one of Studland's sandy beaches 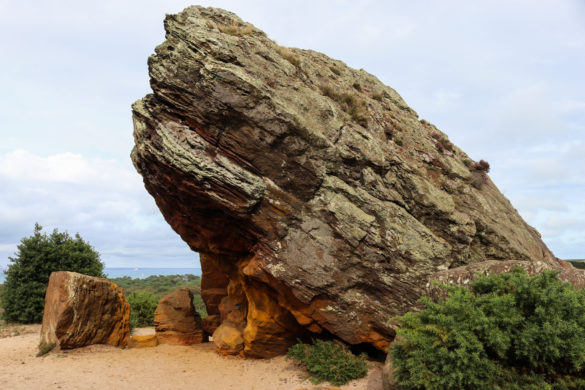 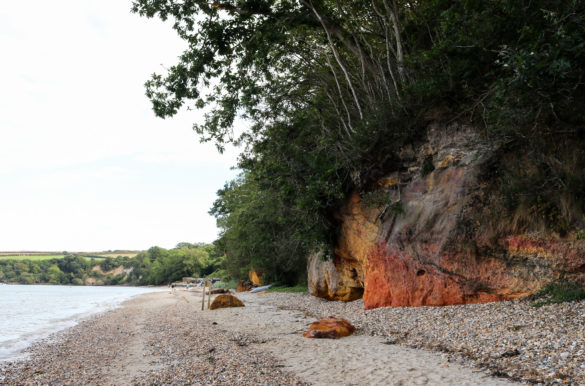 South Beach is the closest beach to Old Harry Rocks 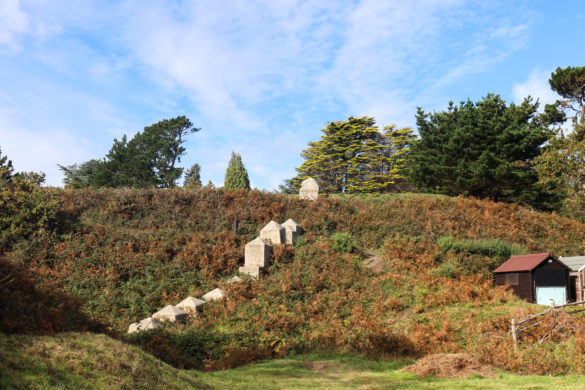