The Isle of Purbeck is arguably best viewed from atop its rolling hills as they fall away into picturesque villages and farmland on one side, into the stunning and famous landform-dotted sea on another, and with views reaching across Poole Harbour at yet another.

Once you’re up in the hills, the scenery is different from every angle and with each step you take. You can head up into the Purbeck Hills from village such as Corfe Castle for a quick scamper and some panoramic views, or hike along them to leave the world behind and get lost in nature. 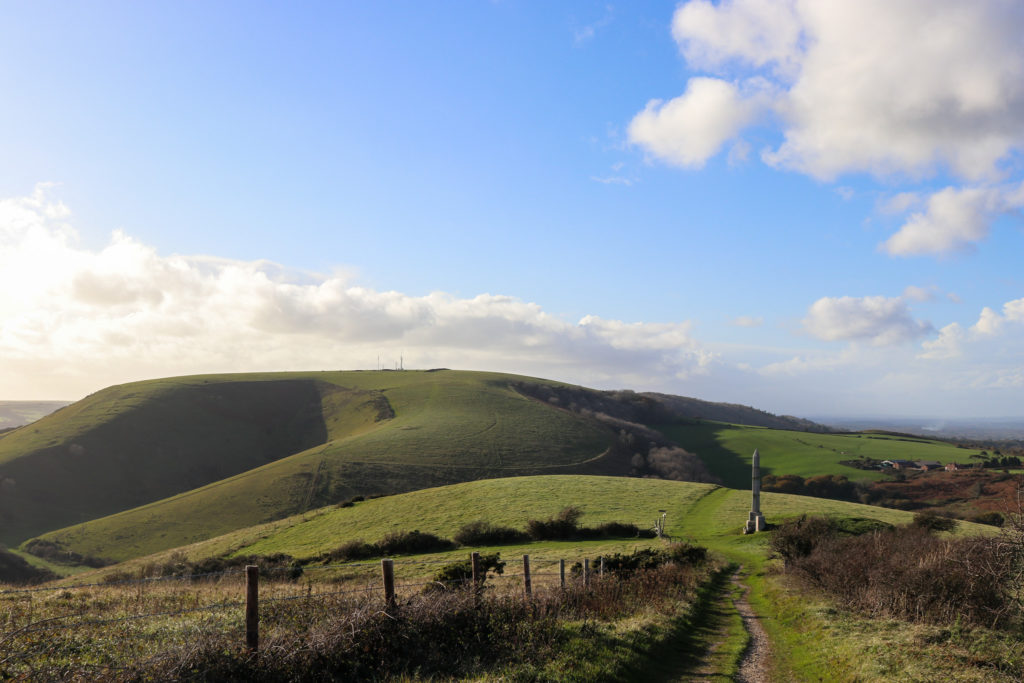 The Purbeck Hills are a chalk ridge that was formed some 20 million years ago – part of the fold of land known as the Purbeck Monocline.

This ridgeway is around 15 miles long and runs from Handfast Point, where the famous Old Harry Rocks is located, cutting through the Isle of Purbeck, ending at Cow Corner and Arish Mel, close to Worbarrow Bay.

The chalk ridgeway is broken by the Ulwell Gap, as well as two gaps at Corfe Castle. The chalk hills are best viewed at either end where they meet the coast, providing some wonderful vistas.

Walking along the ridge is to walk back in time, with the lives of the people who were here before beneath your feet – the popular walking route between Corfe and the Ulwell Gap is rich with ancient burial mounds called barrows, most notably those of Ailwood Down.

Old map showing the chalk ridge of the Purbeck Hills

Steeped in history and geology it’s no wonder this part of England has been drawing visitors and people relocating to live, as well as inspiring countless creatives, for generations.

Writing of Ballard Down, near Swanage in his novel Howard’s End E.M Forster praises the all-encompassing views:

‘If one wanted to show a foreigner England, perhaps the wisest course would be to take him to the final section of the Purbeck Hills, and stand him on their summit, a few miles to the east of Corfe. Then system after system of our island would roll together under his feet.

‘Beneath him is the valley of the Frome, and all the wild lands that come tossing down from Dorchester, black and gold, to mirror their gorse in the expanses of Poole…

‘Bournemouth’s ignoble coast cowers to the right…Seen from the west, the Wight is beautiful beyond all laws of beauty. It is as if a fragment of England floated forward to greet the foreigner–chalk of our chalk, turf of our turf…

‘…Like a wave on the Swanage beach; the imagination swells, spreads, and deepens, until it becomes geographic and encircles England.’

Famous features of the Purbeck Hills

Ballard Down is the headland at the northern end of Swanage Bay. Its thriving grassy, downland habitat supports an array of wildflowers and butterflies and offers some of the finest views in Purbeck.

You can walk up here from Swanage. This walk encompasses the intriguing obelisk – a piece of the town’s Victorian history, and offers breathtaking views across Poole Harbour, over to the Isle of Wight and back over Swanage town and bay.

Another popular walk along the same section of the ridgeway is from Corfe, along the ridgeway to Ballard Down. If you’re staying in Swanage, why not hop on a Swanage Railway train and walk back from Corfe along the hills. 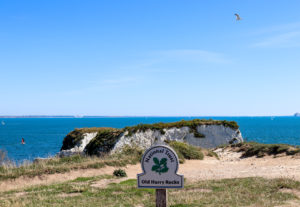 The chalk stacks and cliffs of Old Harry Rocks are a very special part of the Purbeck Hills and are what remains of the line of chalk hills that once connected to The Needles on the Isle of Wight before a huge sea-rise after the last ice age, which you can see on a clear day.

You can walk to Old Harry Rocks from Swanage, or for a shorter, less challenging stroll, park at South Beach car park in the village of Studland. 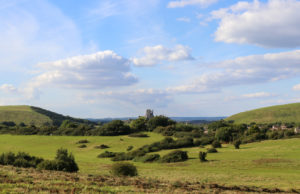 Further along is the ‘gap’ in the Purbeck Hills in which Corfe Castle was built – this gap, which Corfe is said to be named after, was the ideal place to defend this primary route through the hills. The cleft in the hills here is perhaps most distinctly viewed from the Kingston – Worth Matravers road, or – even better – with a local ale in the garden of Kingston’s The Scott Arms.

The walk from Ballard Down and Old Harry Rocks to Corfe Castle forms part of the route known as the Purbeck Way, along which are various Bronze Age burial mounds, such as Nine Barrow Down, which is an old burial plot of 18 round Bronze Age ‘bowl’ barrows, along with an earlier long barrow, located on Ailwood Down. Presumably the ‘nine’ in the name for these is a misnomer.

This path is popular with walkers and cyclists.

The Purbeck Hills extend into the British Army training area, which is accessible to the public most weekends and school holidays.

Nestled at the foot of some of these hills is the abandoned village that stopped in time during World War II, which has since been opened to the public to explore.

The hills toward Tyneham are also home to the National Trust-managed, quirky folly Grange Arch, which makes for a unique picnic spot.

The Lulworth Range walks can have a very secluded feel to them as they are relatively untouched by modern farming and development.

Keep to the waymarked signs for your safety.

The most westerly point of the Purbeck Hills brings you to the Iron Age hill fort of Flower’s Barrow, which overlooks the magnificent Worbarrow Bay and, in the distance, across to Portland.

A popular, yet moderately challenging, way of exploring Flower’s Barrow is to park at Tyneham and follow the South West Coast Path via Worbarrow Bay.

This walk has some stunning, panoramic views and a rugged feel to it.