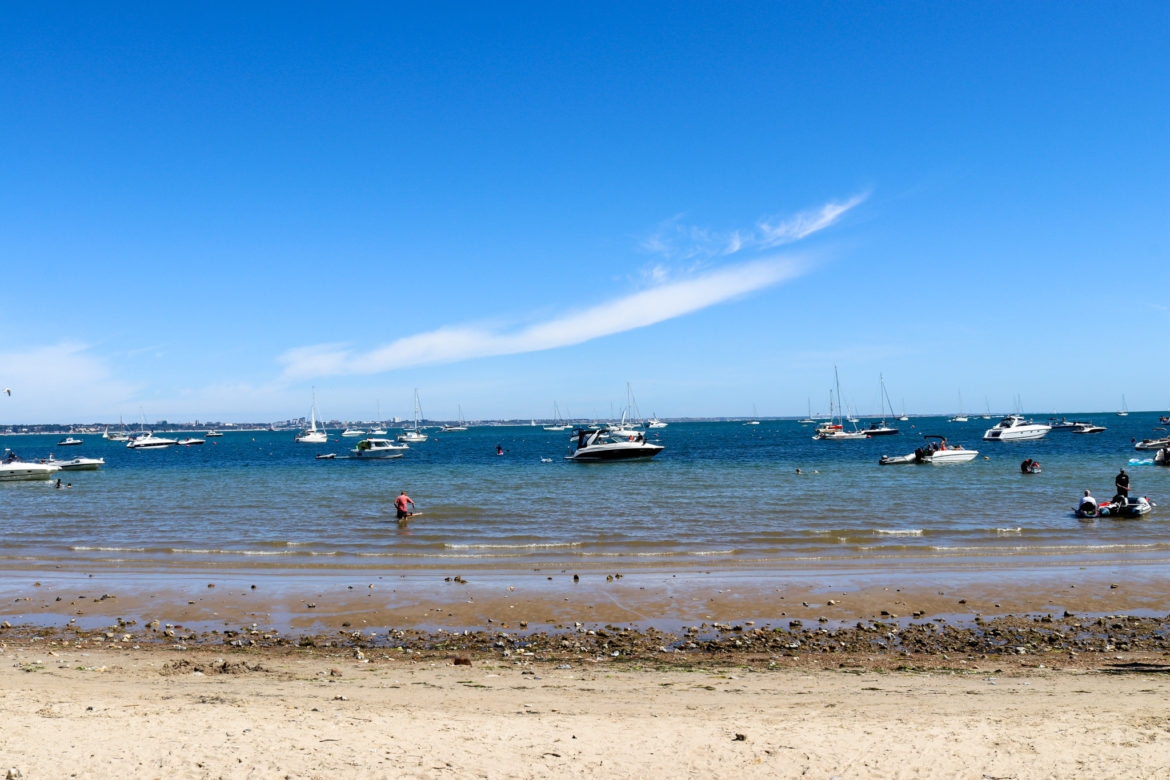 If you love Studland’s beaches but would prefer a more local vibe head to South Beach.

It still benefits from the safe, shallow waters that Knoll Beach offers, but it’s a little more secluded and rugged.

South Beach is popular with kayakers and paddle boarders due to its relatively calm, shallow water, and it has increasingly become a popular mooring spot for boats. It also has a designated safe swimming area, café and beach toy hire.

South Beach also offers stunning views across to Old Harry Rocks. There is a path that leads up to the iconic chalk stalks directly from the beach – the walk is fairly easy and takes around half an hour. There are also various options nearby for exploring Old Harry Rocks via kayak and horseback.

There are also echos of the past – both man-made and natural – here, with a World War II pillbox on the beach itself and easy access to observation bunker Fort Henry, next to the unique red and yellow-coloured sandstone of the cliffs.

This family-friendly beach has attracted both visitors and locals alike for many years – in fact, it used to be home to an annual August regatta where locals and visitors competed against each other in rowing and sailing races, as well as tug-of-war games – with the winners being treated to a free pint at the local pub. 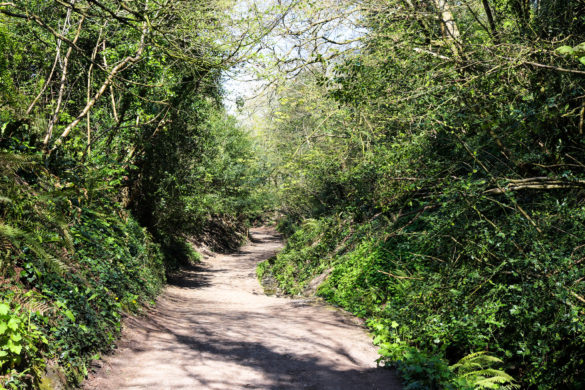 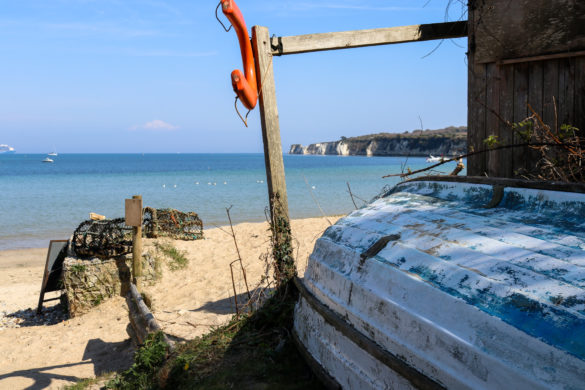 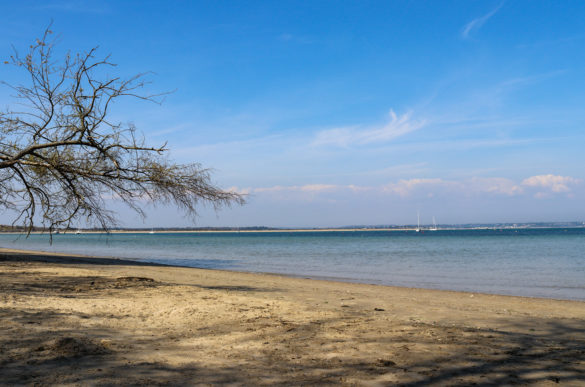 A tree leans over the sand 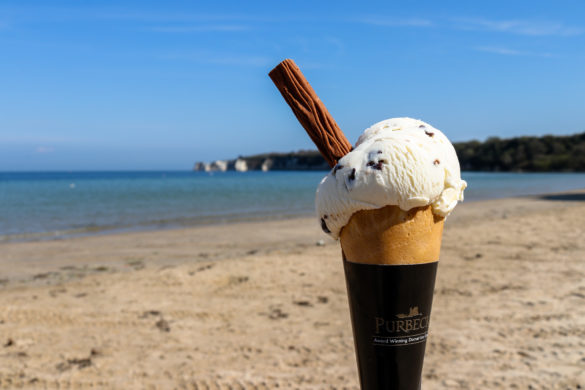 Purbeck Ice Cream from Joe's Café on the beach 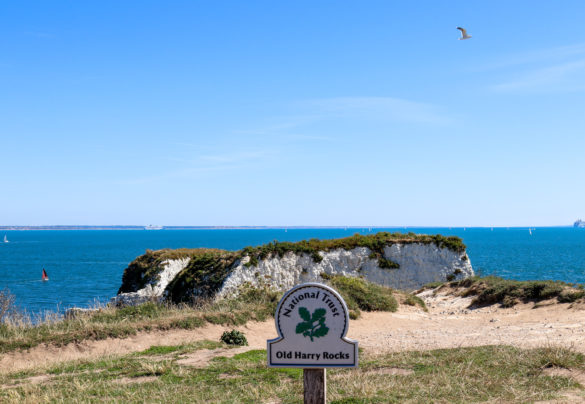 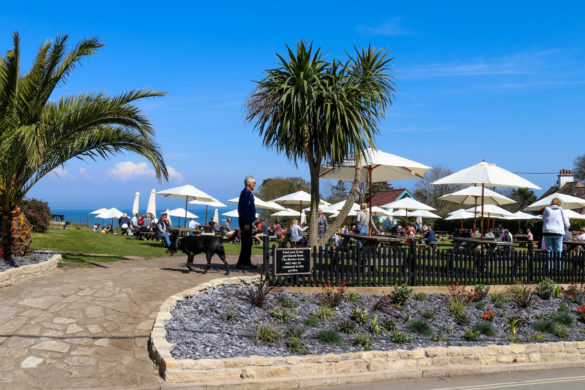 The beer garden of the nearby Bankes Arms Inn 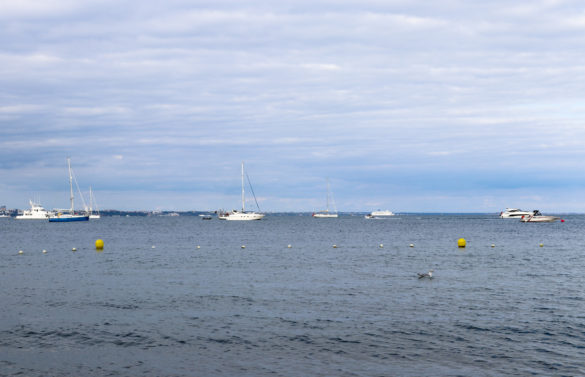 South Beach is a popular place to moor boats, and has a designated safe swimming area 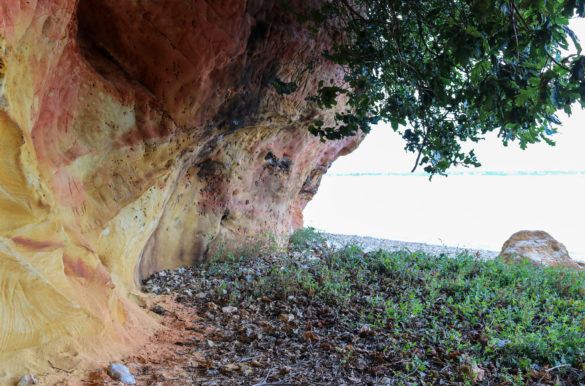 Interesting colours in the cliffs

South Beach has a café hut with an outdoor seating area, which sells hot and cold snacks and drinks using organic, Fairtrade and locally-sourced ingredients where possible. 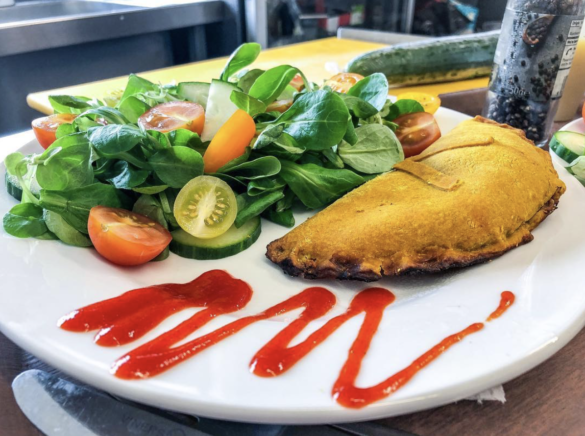 On the menu: vegan Jamaican Pattie, side salad and chilli sauce captured by 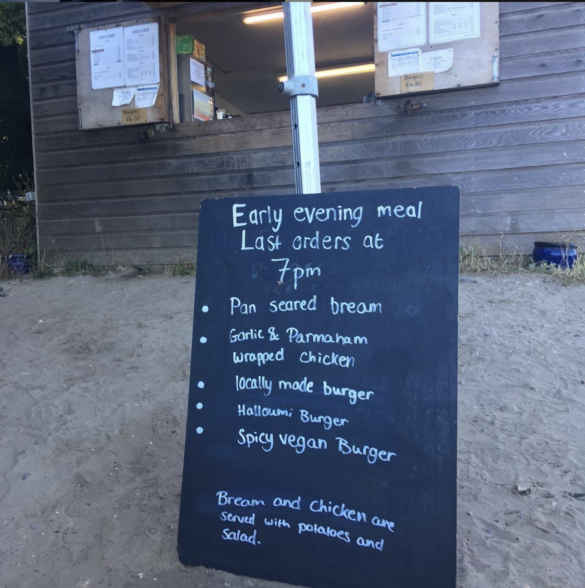 A lovely spot for an al fresco evening meal... 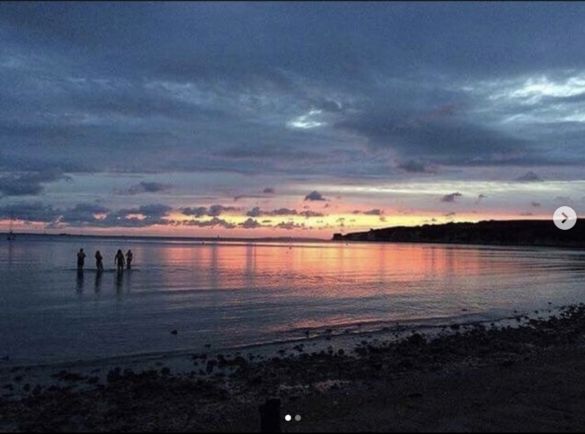 ...or for a sunrise swim before warming up with a hot drink 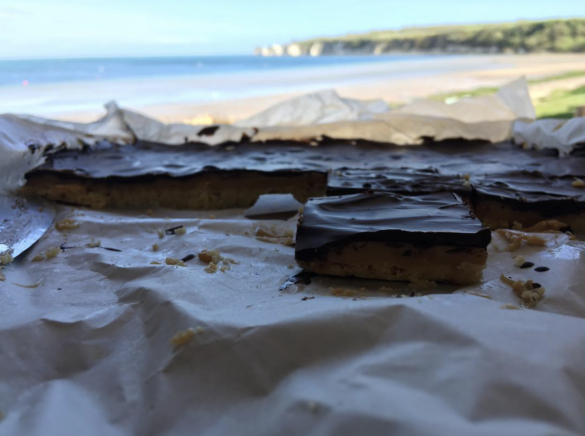 Brownies at the beach 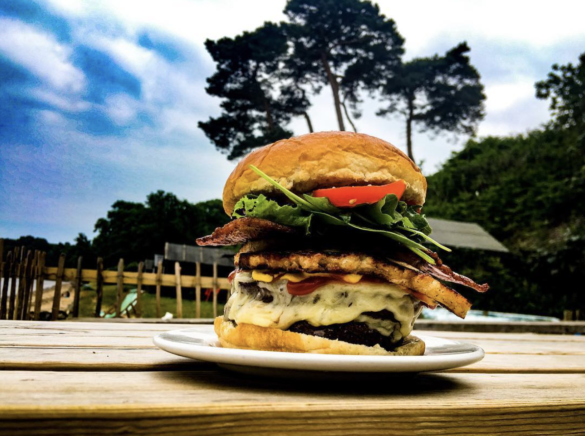 Burger stack with halloumi and bacon 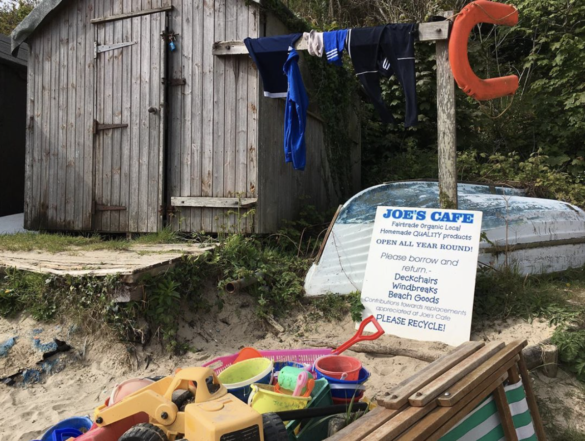 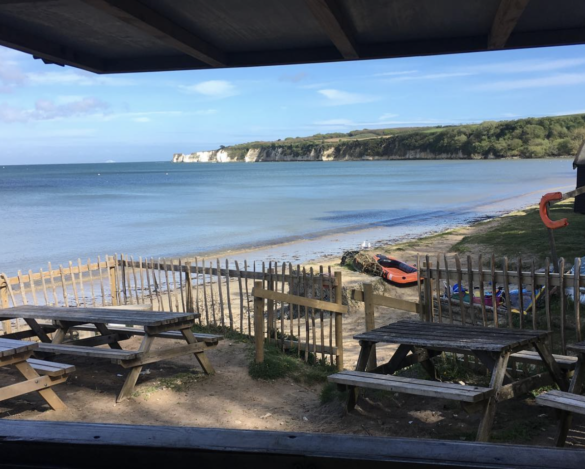 The seating area looks out across to Old Harry Rocks

Joe’s Café is open daily between 11am – 4pm throughout the year.

Book in advance for evening meals, including regular paella evenings: 07931 325243

The café also lends out beach equipment, including windbreaks and buckets and spades.

South Beach is the closest of Studland’s beaches to the village pub, The Bankes Arms, which serves traditional pub grub, as well as on-site brewed Isle of Purbeck beer. 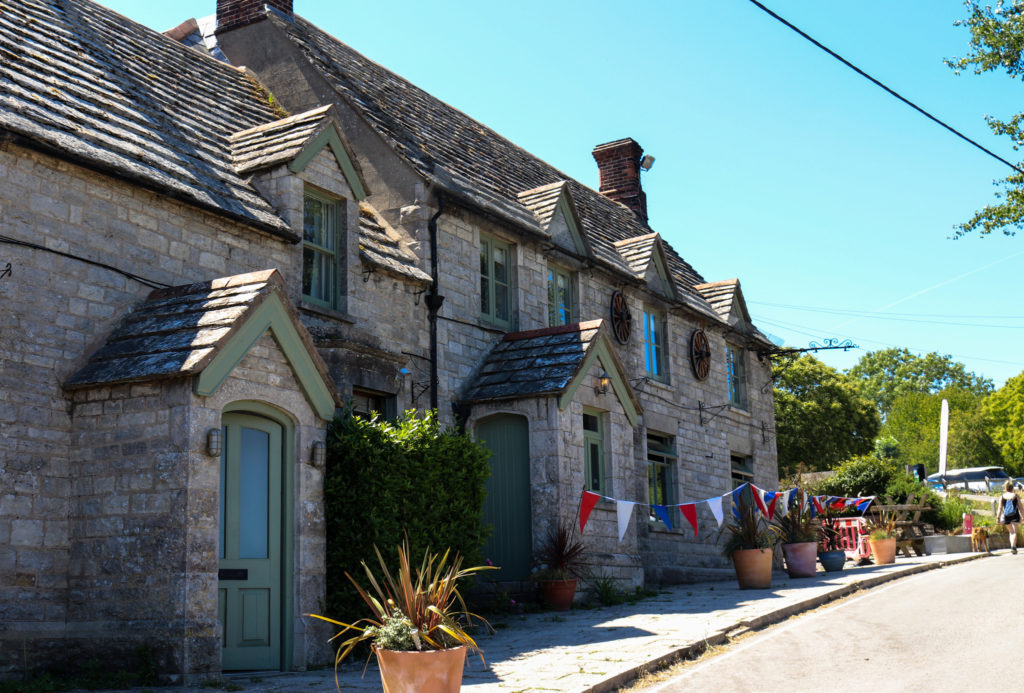 Picnic essentials can be purchased from the village shop, along with a wide variety of household items, pet supplies and souvenirs.

It is located on the main road as you come in to Studland (Swanage Road) and is open seven days a week. 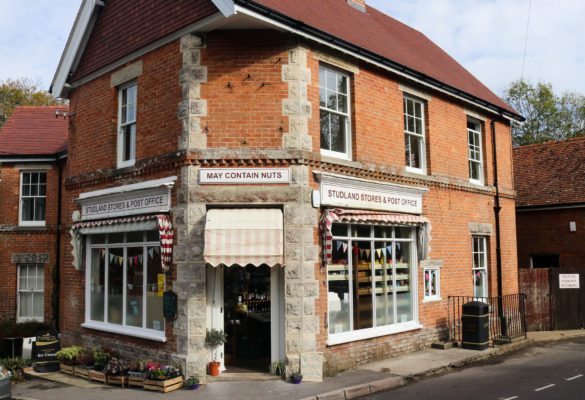 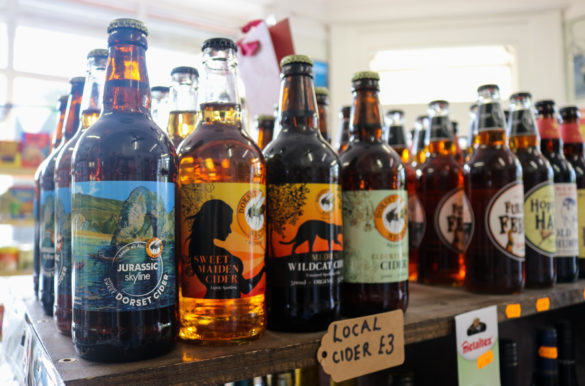 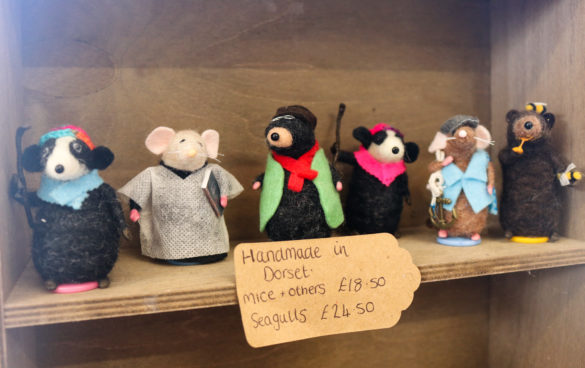 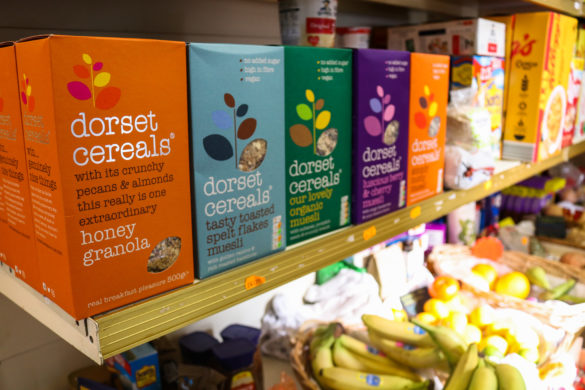 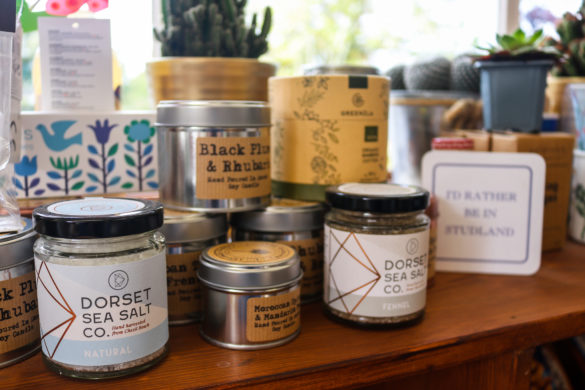 Bath salts and candles from Dorset 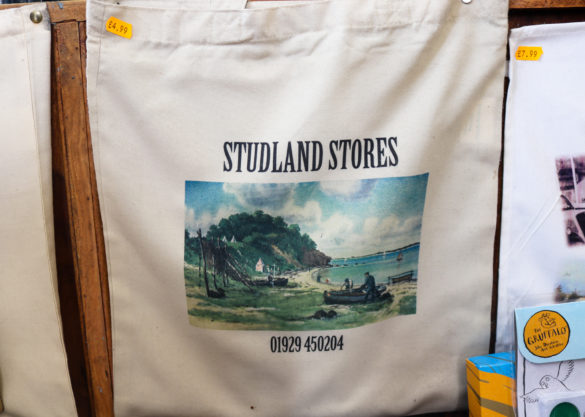 Note that there are no public toilets at South Beach – the nearest one is on Watery Lane.

There are also public toilets at nearby Middle Beach and Knoll Beach.

It’s hard not to notice the reminders of both recent and ancient history along the Jurassic Coast and this small beach – once known in fact as ‘Little Beach’ by locals – is no exception.

Towards the northern end of South Beach (walk left when you arrive on the strand) are two intriguing features of local history – one natural and one man-made.

The striking red and yellow sandstone of the cliff at this end of the beach is an example of the rich and varied geology of this part of the Jurassic Coast.

It’s thought the many small holes throughout the rock have been made by bees. 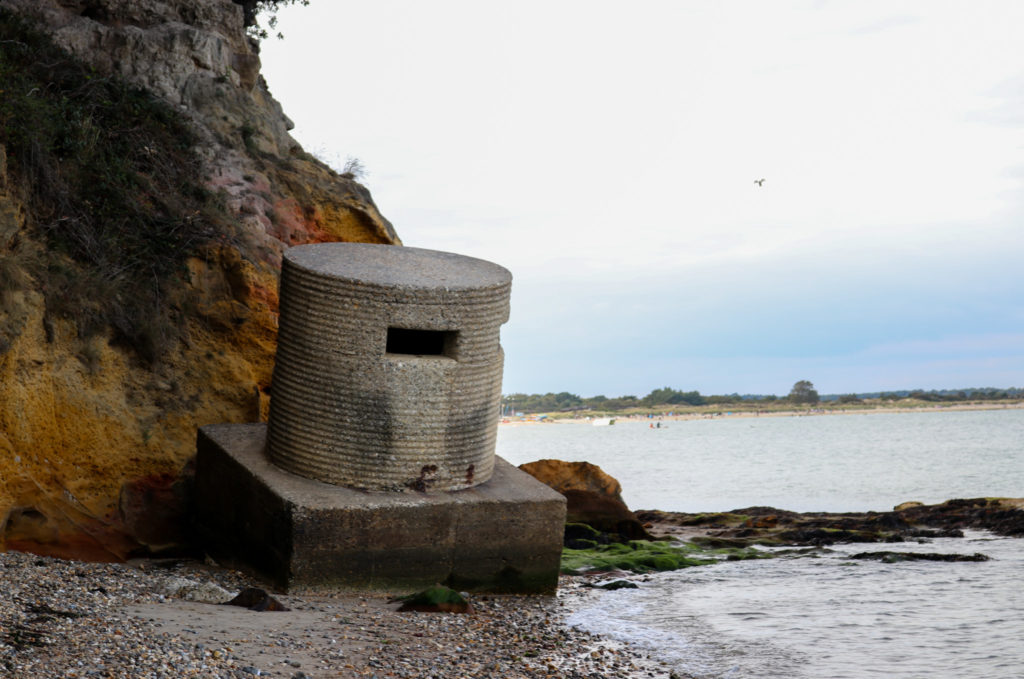 These WWII pillboxes are dotted along the Dorset coast (you may have spotted the one in Kimmeridge Bay).

Manned by a single gunman, these intriguing structures served as lookouts in case of German invasion from the sea.

This one – a type 25 ‘Armco’ pillbox – at Redend Point on South Beach is now a Grade II listed building. It was installed as part of the Studland coastal defences in 1941 after the area was deemed liable to invasion. It’s believed to have fallen on to the beach from where it would have originally been situated on the cliff above it – where the gunman would have had a clear view across the beach and over the bay to Old Harry Rocks.

During the war, and in preparation for D-Day, Studland Bay was used as an amphibious assault training area. The D-Day rehearsal – ‘Exercise Smash’ –  was the largest live ammunition rehearsal exercise of this time.

Many of the beach huts on South Beach are privately owned and have been in the same family for generations, however there are some available for hire. 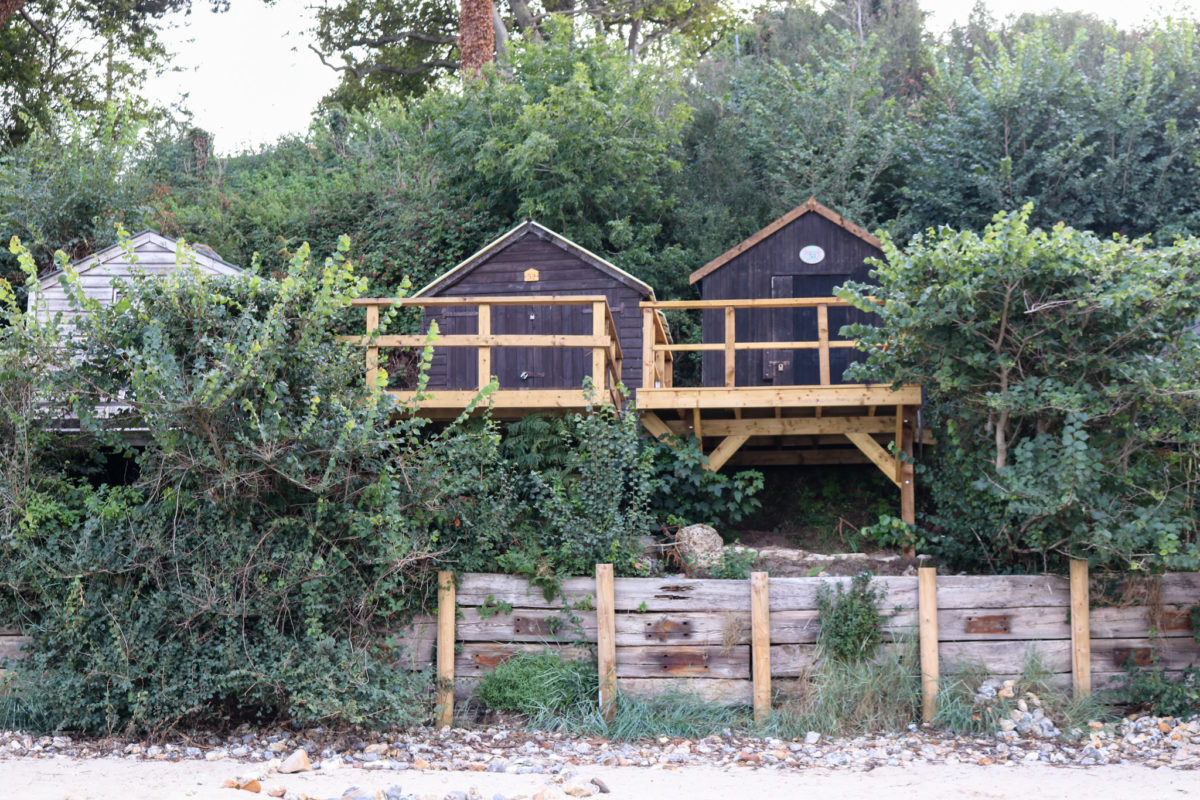 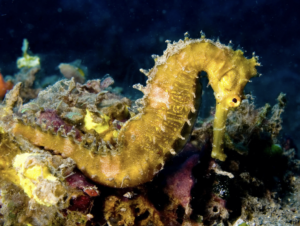 The spiny seahorse is a protected species that has made its home here in Studland (picture credit: Nick Hobgood)

South Beach, as with much of Studland Bay, provides an important habitat for marine species. The bay is now a designated Marine Conservation Zone (MCZ) – an initiative aimed at restoring and maintaining the seas’ health and productivity, providing a ‘blue belt’ of habitats ideal for marine life to thrive.

The shallow and sheltered waters at South Beach provide the perfect environment for eelgrass, which is home to seahorses, as well as cuttlefish and various species of pipefish; black bream and bass.

At Redend Point (the left-hand side of the beach as you approach) prawns and crabs thrive in the rockpools.

A range of seabirds also frequent South Beach. Look out for gulls and oystercatchers in the summer months and Brent geese and grebes in the winter.

How to get to South Beach 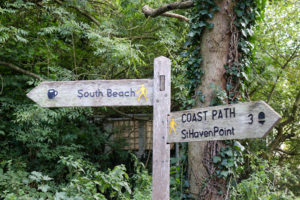 Follow the signs from the road down a short woodland track

Postcode for your SatNav: BH19 3AU

This will take you to the National Trust car park, which is situated next to the Bankes Arms pub on Manor Road in Studland village.

South Beach is a short walk from here – you’ll find a sign post for the beach as you walk down the hill past the pub.

Drive via Northbrook Road and Ulwell Road until you join the B3351 and follow the signs for South Beach when you reach Studland village.

Take the turning to the right at the small cross roads, just off Ferry Road past the shop, and onto Manor Road.

From Wareham and Corfe Castle

Leave the A351 from Wareham at the bottom of Corfe Castle onto the B3351 and continue until you reach Studland, and continue as above.

From Poole and Bournemouth

Whilst you can go around via the A351, a quick and scenic route from Poole and Bournemouth is via the Sandbanks Ferry.

Once you alight, follow Ferry Road, past signs for Knoll Beach and you will see signposts for both Middle Beach and South Beach car parks.

You can also reach South Beach by taking the number 50 Purbeck Breezer bus from Swanage or via the Sandbanks chain ferry.

The No.50 bus runs between Swanage and Bournemouth every hour. The journey from Swanage to Studland village takes around 15 minutes and from Bournemouth, around an hour. 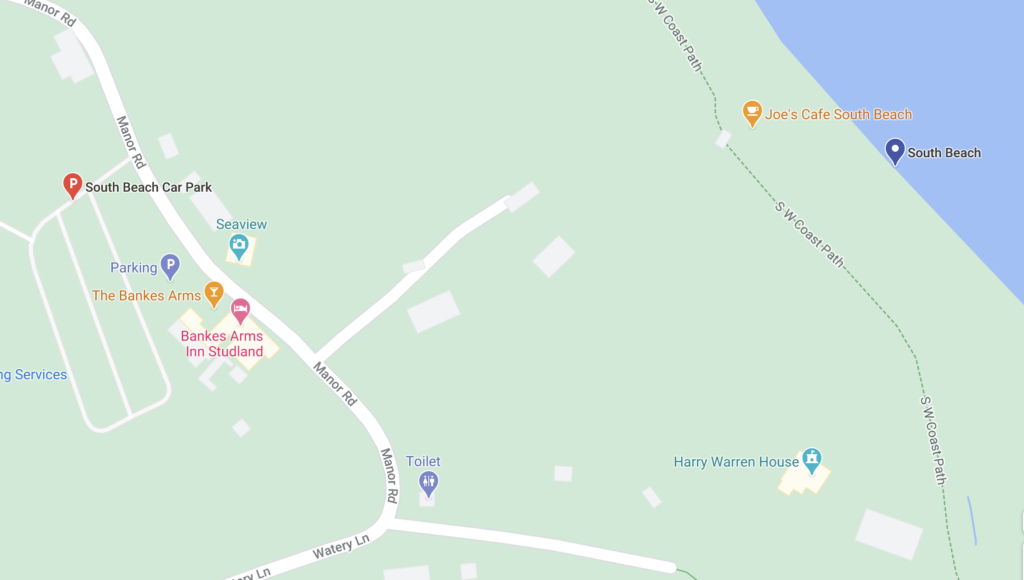