Swanage is probably most well-known for its superb, sweeping sandy bay, which has been drawing visitors for generations.

Being sheltered and with relatively calm waters, Swanage Bay stretches from Ballard Down – the headland to the north – right across to Peveril Point at the south of the bay.

Swanage Bay has both lively sections as well as more secluded spots, meaning there is something for everyone. The bay also serves as a vibrant hub for watersports, with a boat park, boat and kayak hire, diving school, and local sailing and sea rowing clubs.

And with its sandy beach with varied sections – from lifeguarded, safe-swimming areas to more rugged areas further from town, and from busy boating areas to the grandeur of the Victorian pier, Swanage Beach and bay make the perfect retreat from the bustle of today’s busy world. 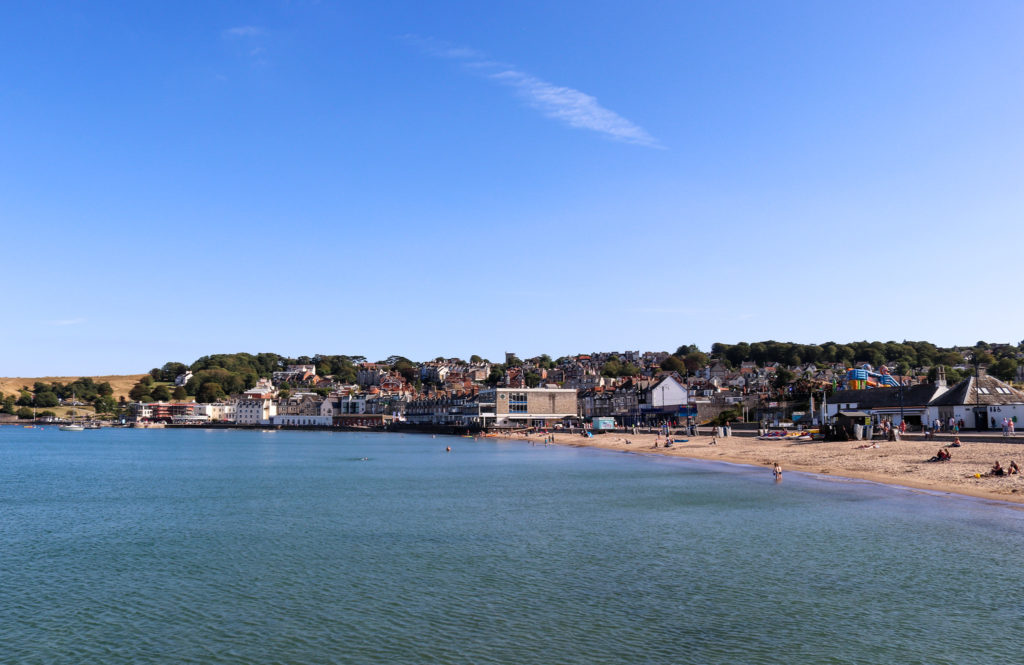 The bay is also flanked by a promenade, beach huts, a variety of eateries, gifts shops and amusements, giving Swanage that charm we’ve come to expect and love in a seaside town.

Walk along the promenade to discover family-friendly fun to sophisticated ‘grown-up’ dining, and dog-friendly cafés to the traditional British fish and chips at the seaside experience.

There are various places along the bay to have a go at a water-based activity.

Hire a boat from the stone pier or mess about on a pedalo with friends on the central beach. Or you can try your hand at kayaking or have a go on a jet-ski further along the beach with Ocean Bay Watersports. 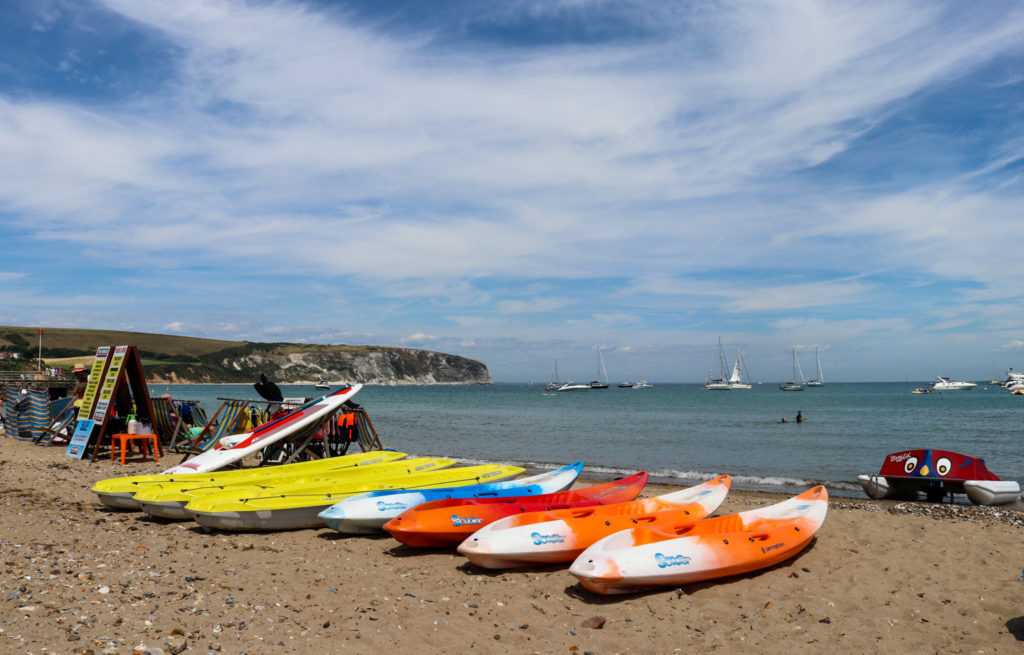 Boats and watercraft can be launched from the boat park at Peveril Point (located just off Broad Road car park).

Users are required to follow local regulations, observing the five-knot buoy area from 15 March to 30 September.

Full details can be found on the Swanage Town Council website: www.swanage.gov.uk/BoatParkRegulations.aspx

Dinghies and other non-power-driven small craft may be launched from the Parish slipway, Ocean Bay Watersports and Monkey Beach.

Note that these areas can receive a high volume of traffic during the summer months.

During the summer months, Swanage Pier sees an influx of divers who come from around the globe to experience the wreck sites off the pier and surrounding area. 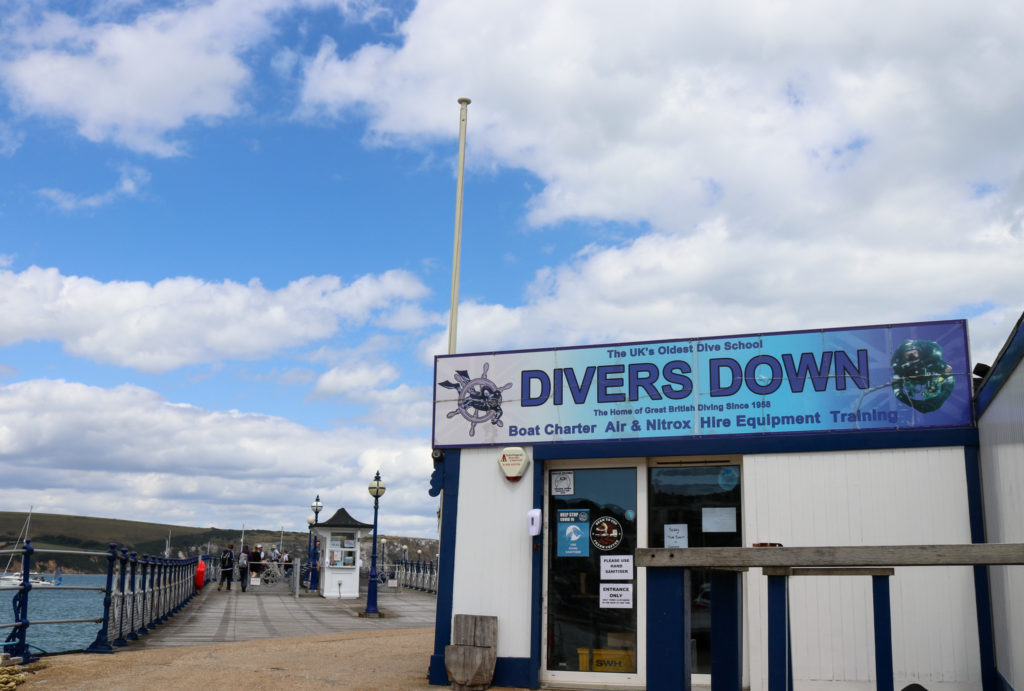 Divers Down at Swanage Pier

Charter diving boats operate from the pier area throughout the summer months, catering for up to 12 people, running to the local wreck sites. Dives sites further afield can be arranged if you’re a group of six or more.

Divers Down also offers diving instruction for the complete beginner to the more advanced.

For prices and booking check the Divers Down website: 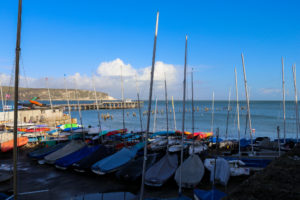 Swanage Bay is home to a sailing club, which offers tuition and ‘Return to Boating’ courses for local members.

Run by volunteers, Swanage Sailing Club has been in operation since 1935 and is situated on Buck Shore, between Swanage Pier and Peveril Point.

To find out how to become a member, get in touch with Swanage Sailing Club (SSC): 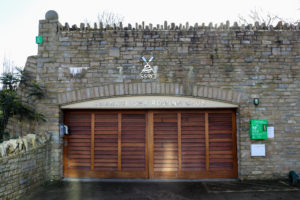 Open to everyone, the Swanage Sea Rowing Club (SSRC) is a welcoming and friendly gig club based at the southern end of Swanage, close to the sailing club and Peveril Point boat park.

There are over 140 members who take part in a range of activities, including: 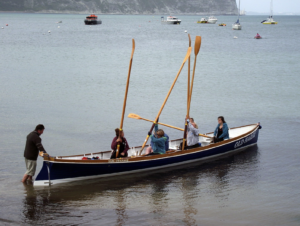 For more information and to check updates, such as session status and weather conditions visit the Swanage Sea Rowing Club Facebook page: en-gb.facebook.com/groups/56231058969/ 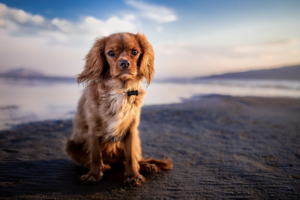 Dogs are welcome on Swanage Beach between 1 October and 30 April.

Between 1 May and 30 September, dogs are banned from the main beach, however they are permitted on Monkey Beach, which is close to the pier, near the old stone quay.

Note that various parts of North Beach are privately owned and each may have their own regulations in place, with signs to indicate individual dog regulations.

The Bay welcomes various annual and one-off events, both on the water, along Shore Road and on Sandpit Field – the grassy hill that rises above Swanage Bay.

It’s the hub for many of the town’s much-loved festivals including Swanage Carnival, the annual rowing regatta and street food fairs.

Watch the famous Swanage Carnival procession and spectacular fireworks displays from various points along Swanage Bay, cheer on the local sea rowers as they compete on the water, and support artisan traders as they line the prom with handmade gifts. 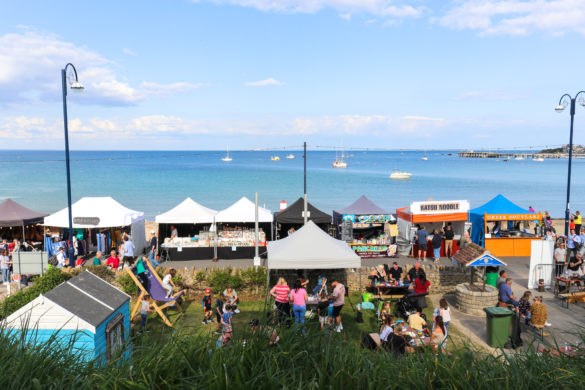 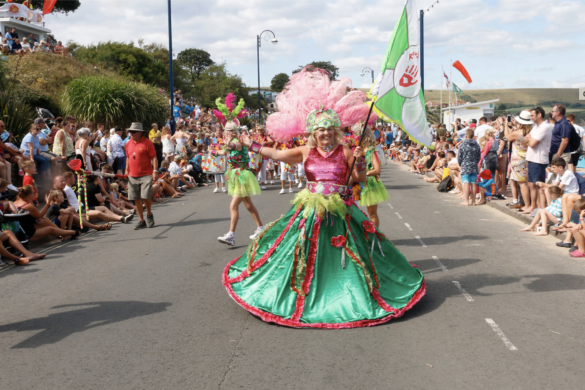 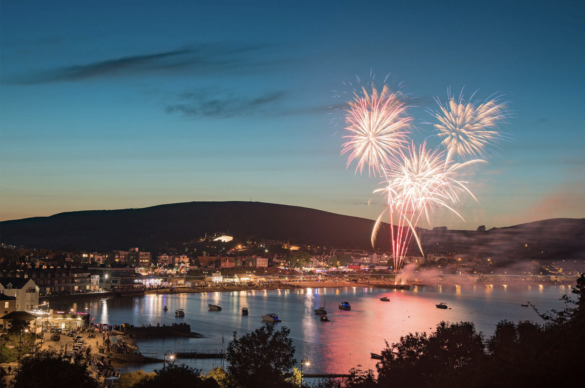 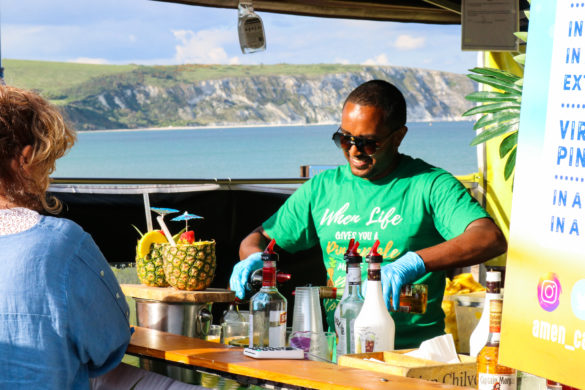 Piña coladas on the seafront 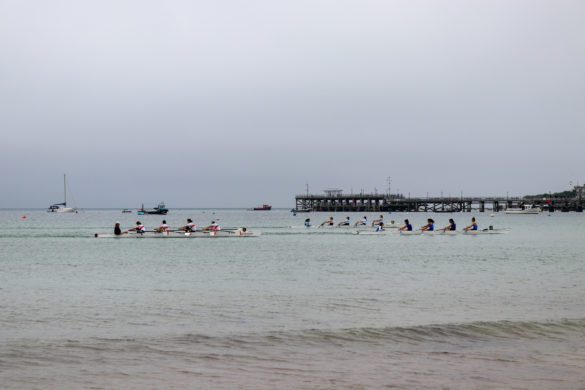 Swanage Regatta in the bay 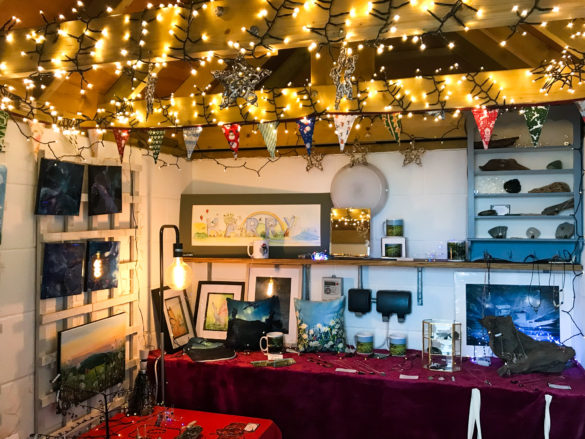 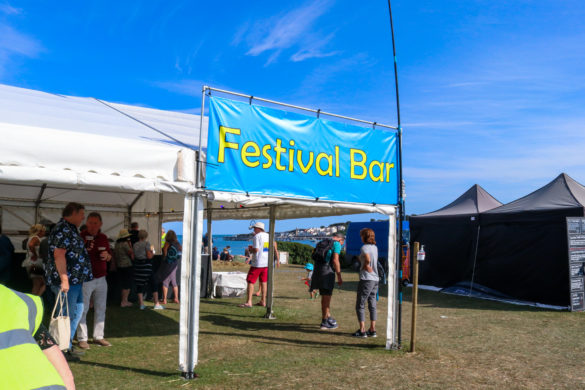 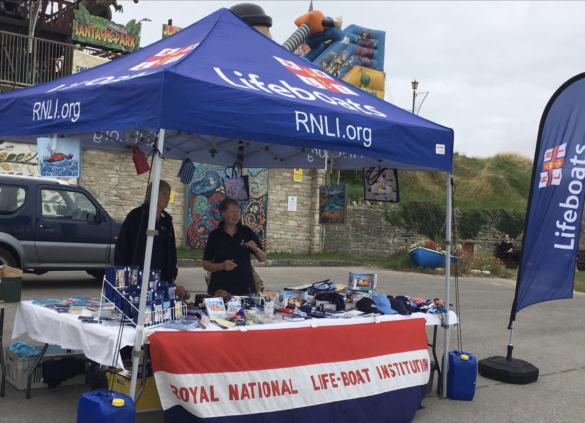 The history of the bay

Swanage Bay’s history is entwined with Victorian England and, further back, smugglers’ tales and Saxon and Viking adventures.

There is a commemorative statue on the Shore Road promenade to King Alfred the Great who, it’s said, defeated the Danes in the sea here in AD 877. This is, however disputed, and the Viking ships are also said to have perished in a severe storm off Peveril Point. 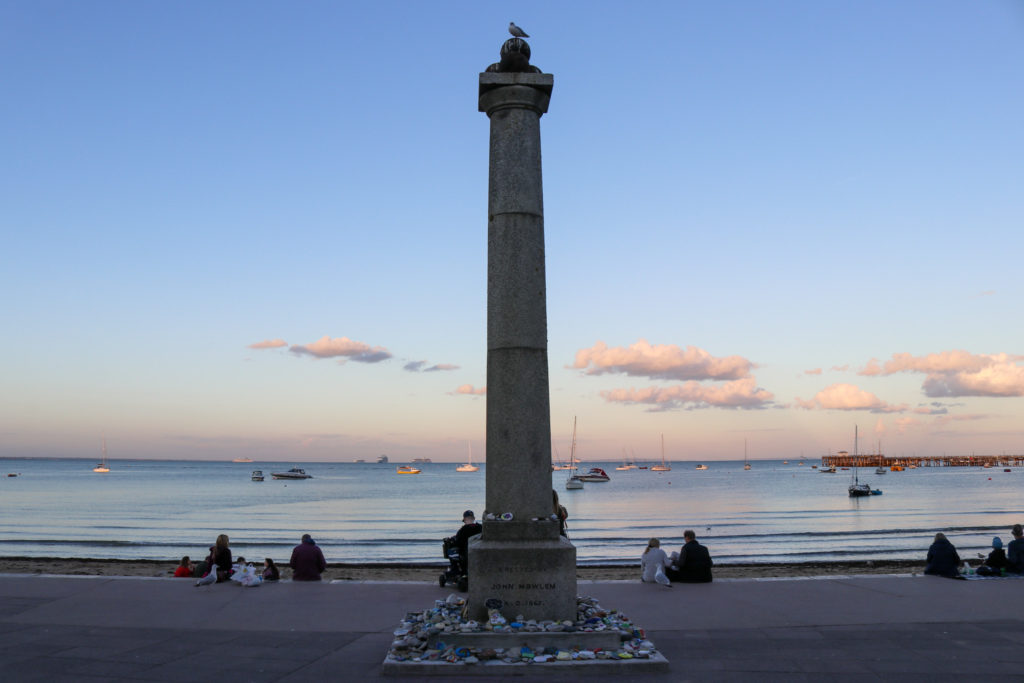 Sun setting behind the King Alfred Memorial on Swanage seafront

This Tuscan column was erected by local Victorian businessman and one of Swanage’s founding fathers John Mowlem (who the town’s cinema and theatre building is named after) in 1862. The Mowlem overlooks the bay and is an important cultural feature of the town.

It was during the Victorian era when Swanage came into its own, flourishing as a seaside resort, even drawing a young Princess Victoria to stay before she became Queen.

Before this, the main economy was still centred around the bay, built around quarrying and fishing. The area’s rich quarrying history can still be seen today in areas of Purbeck such as Winspit and Dancing Ledge.

Today, tourism remains a vital industry for Swanage, with many activities, venues, events and accommodation geared toward visitors throughout the year.

Nearby bays to explore

Whether you’re looking for an active watersports scene or a tranquil, secluded cove to moor your boat or have a quiet picnic, the Purbeck coastline has a diverse range of bays to explore. 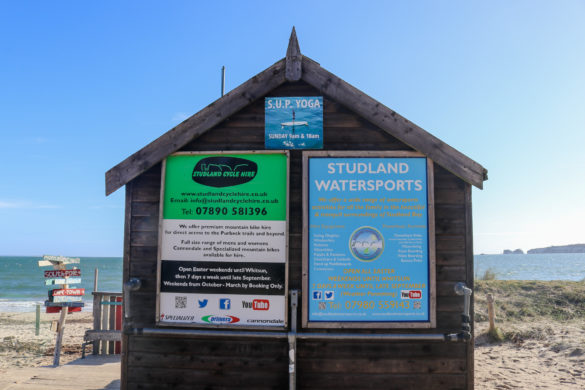 Studland Watersports is based at Knoll Beach 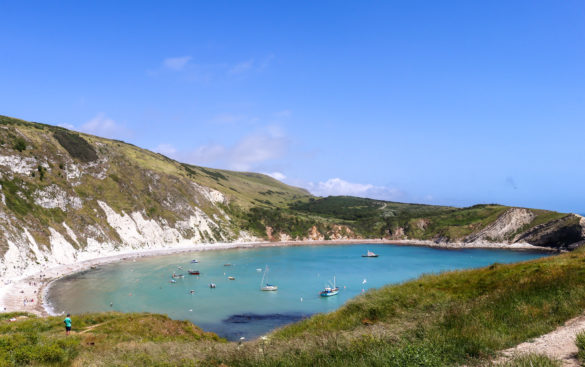 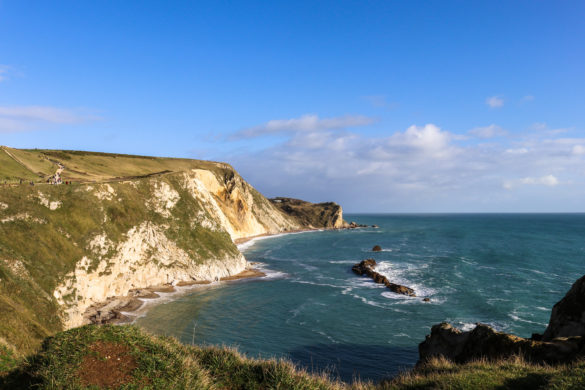 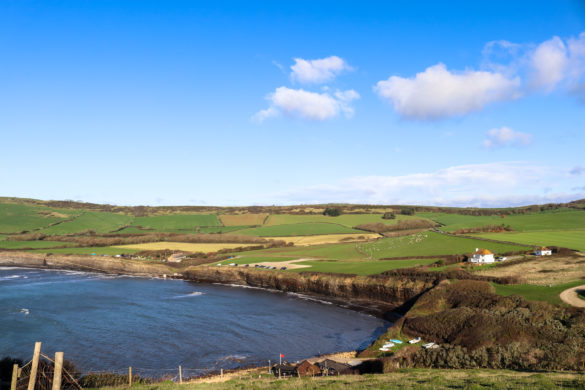 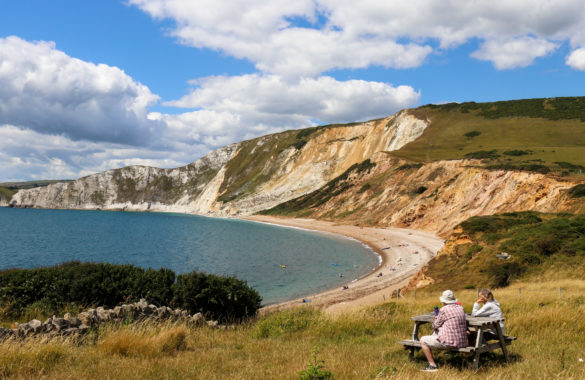