The fully-restored Grade II-listed Victorian pier in Swanage is a must-visit attraction for a sense of the town’s history, as well as giving you a unique perspective of Swanage Bay.

Perfect for a stroll with an ice cream and evoking that nostalgic feeling of stepping back in time, Swanage Pier also has a variety of attractions, including a café, a small exhibition and a gift shop.

Take time to explore the exhibition space, which explains the pier’s history, and stop for a light bite at the pier’s cafe – the aptly named 1859 (the year the original pier was first built).

And, for the more adventurous, you can even book a dive session or training course with the local diving school Divers Down, which is also based here. Nearby is also Swanage Sailing Club and Swanage Sea Rowing Club.

Both the new and the old pier can be particularly atmospheric in different weathers and seasons, and you’ll often find artists or photographers catching the sun rising or setting behind them.

Walking to the end of Swanage Pier gives you a panoramic view of the town and bay, which reaches from Peveril Point around to Ballard Down, as well as the Purbeck Hills that continue on to Corfe Castle and beyond. On a clear day you can see Old Harry Rocks, as well as Bournemouth in the distance and the Isle of Wight on the horizon.

As with many parts of Swanage you can catch intriguing glimpses into the past from the pier, such as the Wellington Clock Tower and, across the bay, the Mowlem theatre. 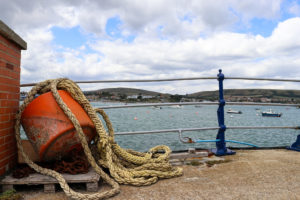 The Purbeck Hills seen from the pier 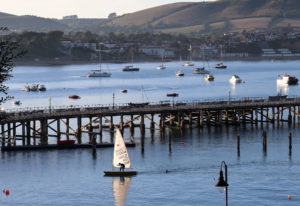 Sailboat by the pier in the evening 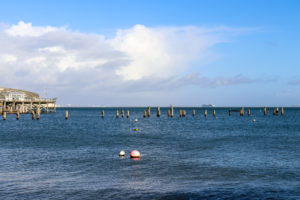 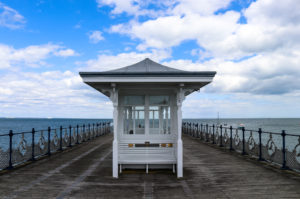 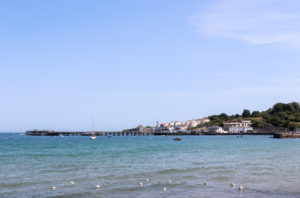 The pier viewed from the Mowlem 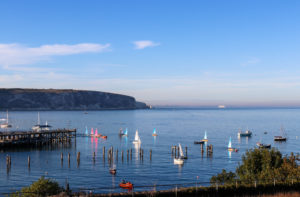 The pier is a popular spot for sailors and kayakers 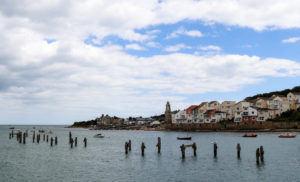 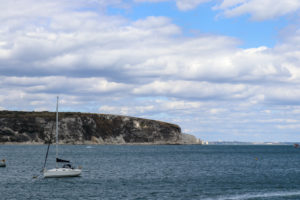 Ballard Down and Old Harry Rocks 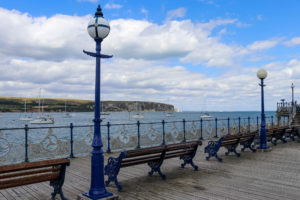 Victorian style seating to take in the views 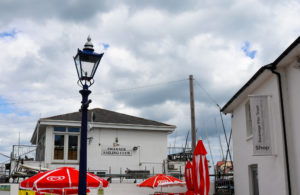 Swanage Sailing Club is based nearby at Buck Shore

The pier is open every day, with the following seasonal hours: 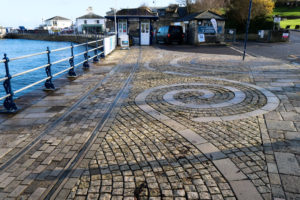 Old tramway by the entrance to Swanage Pier

Between April and September, inclusive, the pier is open:

Hours are often extended during the warmer summer evenings to allow people to enjoy the pier at sunset.

Between October to March, the pier is generally open between 9am – 4pm, but in the darker months it may close at 3pm. 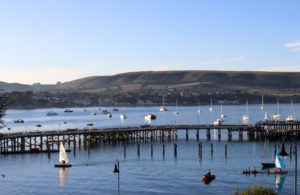 Boats and watercraft in the sea around Swanage Pier

To take a stroll along Swanage Pier, there is a small charge of £1.50 for adults.

Children (up to 14) are free and must be accompanied by a responsible adult.

The 1859 café – named after the date the pier was originally built – offers breakfast, coffee & cake, and lunch in a unique setting. 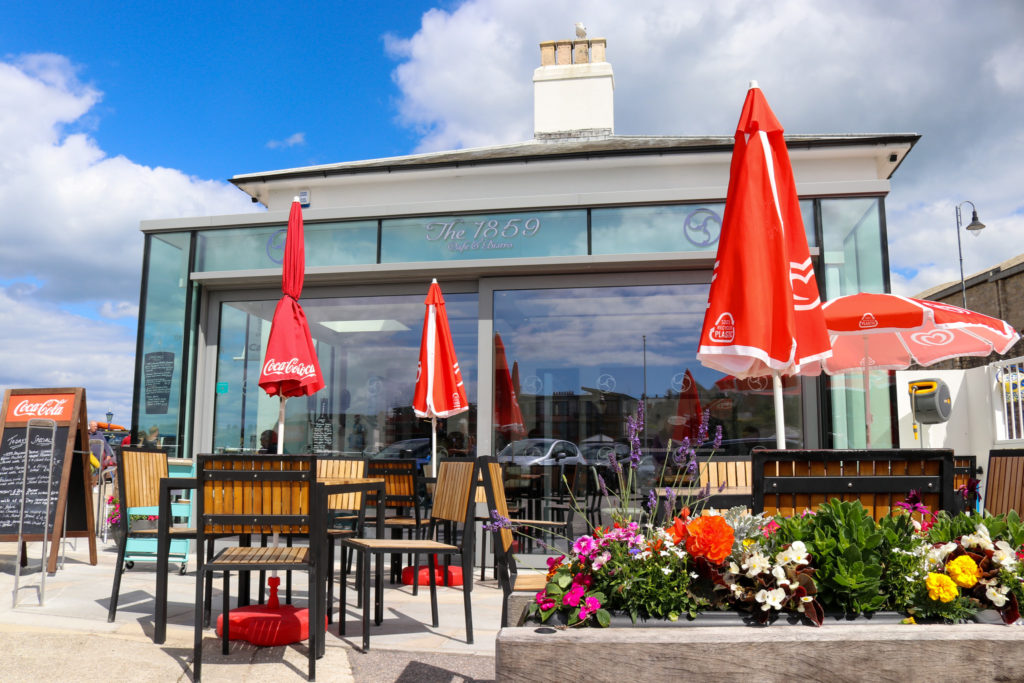 Outside seating at the 1859 café

To book the café for a private evening event, get in touch with the team.

The pier exhibition space, located between the café and the shop, is a must-visit little attraction in itself.

It brings the story of the pier to life with displays, which include artefacts from shipwrecks, an aquarium and images and videos that give a visual history of the pier.

The relatively sheltered dive site off Swanage Pier attracts thousands of visitors each year – and has been since 1958, making it the UK’s oldest dive school. 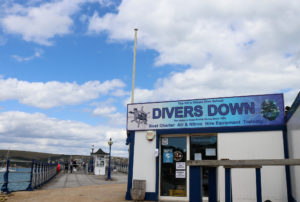 Divers Down is located at Swanage Pier 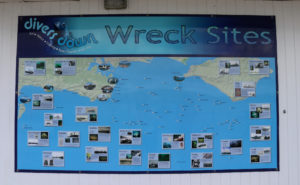 A map of nearby wreck sites at Divers Down

There is a Diver Training Zone for coaching people new to scuba diving or, if you’re an experienced diver, there’s plenty to see under the water either off the pier or out to wrecks beyond Swanage Bay.

Divers Down also has a shop where you can hire equipment, buy diving gear and find out about boat charter trips.

To find out more or book a dive visit the Divers Down website:

You’ll find Swanage Pier at the southern-most end of the bay, close to Peveril Point.

There is a small amount of parking at the pier itself, as well as a larger long-stay car park (Broad Road car park BH19 2AP) a couple of minute’s walk from the pier. 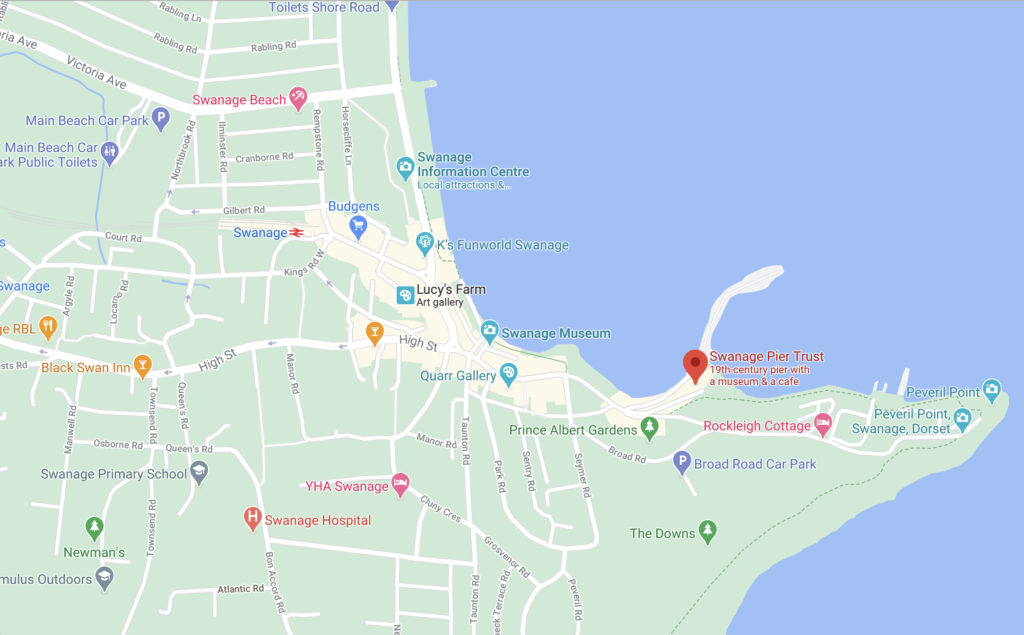 The history of Swanage Pier

The first pier in Swanage was erected in 1859 for quarrymen to ferry Purbeck stone. Stone was loaded into vessels off the pier after being hauled by horse-drawn carts by way of a tramway.

The pier’s skeletal remains stretching out into the sea make up one of the last remaining wooden piers in Britain.

You can also still see what remains of the tramway that runs around 100 metres along the seafront. 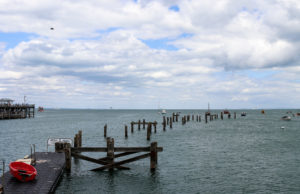 What remains of the original 1859 pier 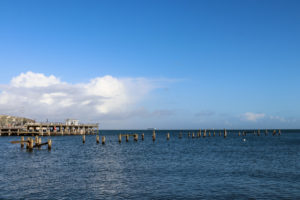 The old pier with newer one behind 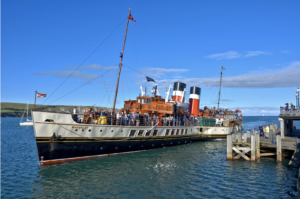 A second pier was later commissioned due to increased demand after paddle steamers and passenger ships to Swanage became more commonplace.

Work began in 1895 and this new pleasure pier was highly popular with visitors arriving by paddle-steamer and processing up and down the promenade until its decline in 1966 (along with the decline in the use of paddle steamers), and subsequent disrepair.

Now owned and maintained by the Swanage Pier Trust, who worked to raise over £1m to repair it, the pier has been rejuvenated as a tourist attraction and base for diving, angling and boat trips.

Watch this charming, illustrated video made for the Swanage Pier Trust with National Lottery Funding for a fun four-minute history of the pier:

Volunteering on the pier

The Swanage Pier Trust relies on volunteers for its continued maintenance, and must raise some £200,000 a year.

If you would like to donate or help with volunteering opportunities, visit the Trust’s website to find out more: www.swanagepiertrust.com/volunteering 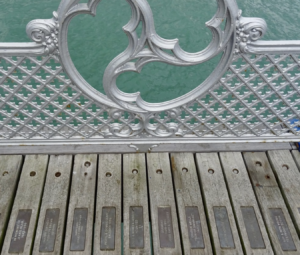 As you walk along the pier you’ll notice that many of the planks have plaques with messages and dedications engraved on them.

Anyone can sponsor a plank, which aids the ongoing upkeep of the pier, and leaves a lasting memory in this special part of Swanage.

The commemorative plaques have a maximum message length of 30 letters and come with a certificate.

Many people leave a message for a loved one, or sponsor one to mark a special birthday or anniversary. 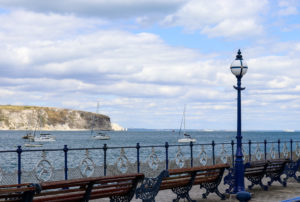