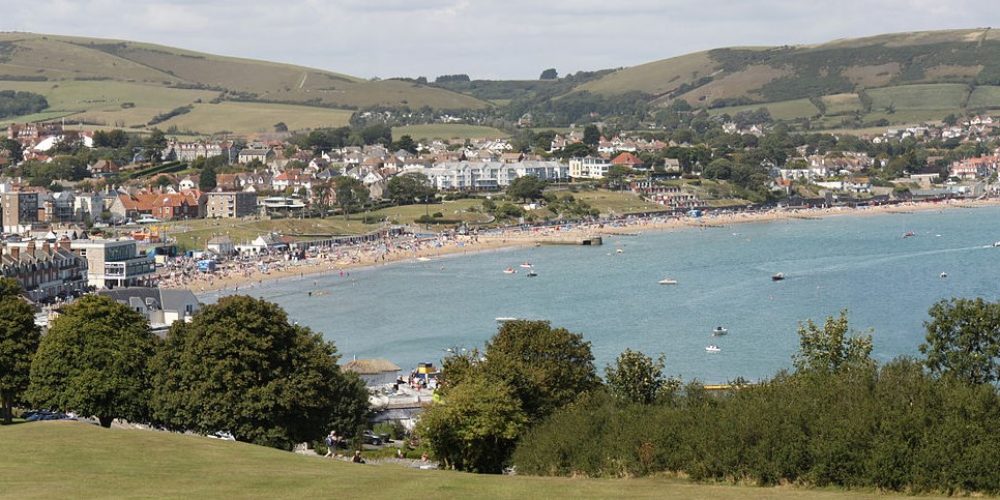 Swanage town, originally a small port and fishing village has become a very popular place to visit. People are drawn to its sandy beaches and the beauty of hills and cliffs, landscapes and wildlife surrounding the area. Swanage’s climate is classified as warm and temperate. Still, it is an oceanic climate. This means that all seasons are humid, and the winters are not very cold. Summer is the warmest season, but do expect some rain here, as well. It is, after all, England. Since the town lies around 6m above the sea level, its weather is very much influenced by the ocean.

Being on the southern coast of England, Swanage often gets some of the better weather found on the British Isle. The average weather in Swanage ranges from around 4 degrees Celcius in the winter and around 20 degrees Celsius in the summer. June to September are the months where the most sun and warmth can be seen. Similar to the rest of the British Isles, Swanage is known for its maritime climate. The location experiences warm summer seasons and cool, yet not extremely cold winters. Swanage’s coastal location works to ensure smaller variances in annual temperatures than locations that are further inland. Rainfall amounts are typically highest during the winter months and lowest during summer months. The town’s positioning on an Eastern bay provides a bit of protection from prevailing southwestern winds.

Generally, there are four different tides per day in Swanage, however, depending on timings it can sometimes only be three. The low tides can be as low as 0.3 metres while the high tide can be up at 2.2 metres. This part of England enjoys all four, clearly defined seasons. In late spring and summer, the best weather arrives. If you are a summer type of person. According to some data, April is the driest month. Even in the warmest months (July and August), there are unpredictable rainfalls. The average annual temperature is 10.2 °C (50.3 °F). The rainfall in Swanage here is around 807 mm ( 31.8 inches) per year. 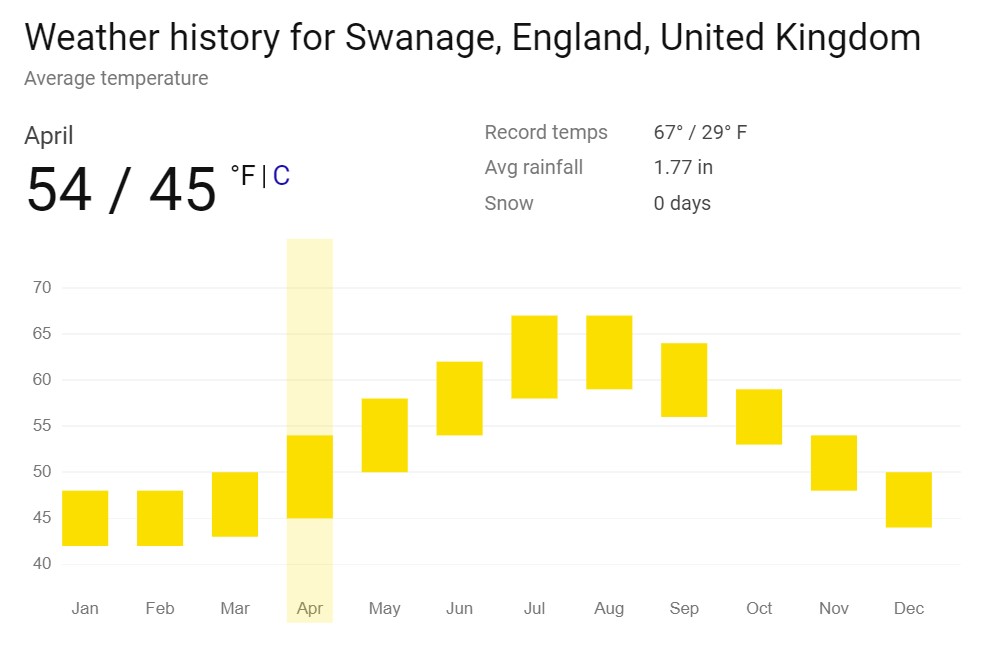 It depends on what kind of holiday are you looking for, you can find any season that suits your needs. Since the Jurassic Coast of South-West England is, well, on the coast and you want to enjoy the beach, then, probably the best time for you to visit Swanage would be from late spring – May until October. March and April will be drier than the winter months, but there will be many cold days, this time of the year. Some data show a very pleasant climate in May, with the sunniest days. Temperatures climb up to more than 22°C (72°F) or 23°C (73°F). This time the beach crowd starts coming.

Although warmer days arrive in May, this is also the time for a rainy season, as May and June are often very humid months. So, expect some rainy days, followed by sunshine. This is the season when green colors are most fresh, and the scent of flowers and meadows is opulent. In July, the real summer starts. Beware, it is still an English summer. So, the temperatures are warmer, but the weather can be unpredictable. You could experience some rainfall here, as well. But it will be limited, and you can enjoy the sun on the beach and pleasantly warm temperatures. There are some days in summer months, where the temperature goes up to 28° C (82.4°F). But, the mean daily maximum, in the warmest months- July and August is around 22° C (71.6°F). Those are months with the most sunshine, as well.

If you are a type who is looking for off-season holiday on the beach, we would recommend visiting Swanage in early September. It is the time when schools and Universities start, and many people return to the cities. Although September seems to be a bit colder than July and August, with the maximum daily mean Temp around 20° C (68° F), it is still not as wet as you would expect. There are still many sunny days, left to enjoy, on a much- less- crowded beach. September is perfect to visit Swanage, because, although the air temperature is a bit colder than in July and August, the water is actually warmer.

The sea temperature in September reaches its peak, with the average being around 17° C (62.6°F). Although 17 or 18° C is still not very warm and not very pleasant for swimming for some people, there are numerous water sport activities, you can enjoy. Kayaking, canoeing, sailing, windsurfing and jet skiing are just some of them. Swanage is considered by many to be the best place in England for scuba diving. It hosts many diving schools and of them is even the first dive school in Great Britain. If you are not a water sports type of person, maybe you like to fly a kite on the beach or a meadow.

Following September, the month with the highest number of rainfalls arrives – October. If you don’t enjoy this kind of weather, with heavy rainfalls, then you should skip visiting in October. If you want some peace and quiet, hotels are definitely not booked out this month. And, with the weather not being too cold, you can have a nice quiet holiday in autumn, as well.

The coldest months are January and February, with the average temperature, during the day, around 3°C (30°F). After the winter, the sea will be cold, with a sea temperature around 8.7 C° and it is not suitable for swimming. Although the weather is cold outside, New Year’s Eve is a big event in Swanage. People from surrounding towns and villages dress up and come to Swanage, just to attend this event.

If you want some details on temperature and climate in Swanage, here are some helpful sites. Here you can also check the winds in the region:

It is good to be prepared and to know the climate of the place you are visiting. Otherwise, you could pack a bunch of unnecessary pieces of clothing or don’t pack what you need. Since Swanage is a place where you will most probably be outdoors a lot, just make sure to pack your waterproof jacket and enjoy Swanage to the fullest!